The USDA Food Patterns are intended to represent the types and amounts of foods that will provide nutrients sufficient to meet IOM nutrient recommendations and Dietary Guidelines for Americans recommendations. They are updated every five years during the deliberations of the Dietary Guidelines Advisory Committee, and are presented to the Committee for their assessment of the Patterns’ adequacy. As part of the update, amounts recommended from each food group may be modified to reach all or most of the specified goals. In addition, the amounts from each food group are compared to usual dietary intake patterns of the U.S. population, and kept within the normal range of consumption.

History of the USDA food patterns

Food guides describe the types and amounts of food to consume. Over the past century, USDA has developed a number of different food guides to identify patterns of eating that would meet known nutrient needs and balance intake from various food groups. Many of the earlier food guides focused on nutrient adequacy only and were designed to meet known nutrient needs at the time. Beginning in the late 1970s, recommendations for dietary moderation to help prevent chronic disease were issued. A need was recognized for a food guide that made food intake suggestions for a “total diet” rather than a “foundation diet” in order to encompass goals for moderation as well as adequacy.

The first USDA Food Patterns that represented a “total diet” approach to food guides were developed in the mid-1980s and, starting in 1992, presented as the Food Guide Pyramid. From 2002 to 2005, the USDA Food Patterns underwent a major revision to meet the newly released IOM Dietary Reference Intakes and were included in the 2005 Dietary Guidelines. The patterns were also updated using the same process for the 2010 Dietary Guidelines. The current USDA Food Patternsxii, showing recommended amounts or limits from each food group, are listed in Table E-3.1.A1xiii.

The overall iterative process used to develop and update the USDA Food Patterns includes (1) identifying appropriate energy levels for the patterns, (2) identifying nutritional goals for the patterns, (3) establishing food groupings, (4) determining the amounts of nutrients that would be obtained by consuming various foods within each group, and (5) evaluating nutrient levels in each pattern against nutritional goals. Each is described briefly here.

Figure 1. Example of disaggregation of a mixed food into item clusters

Figure 2. Example of aggregation of an item cluster from various foods 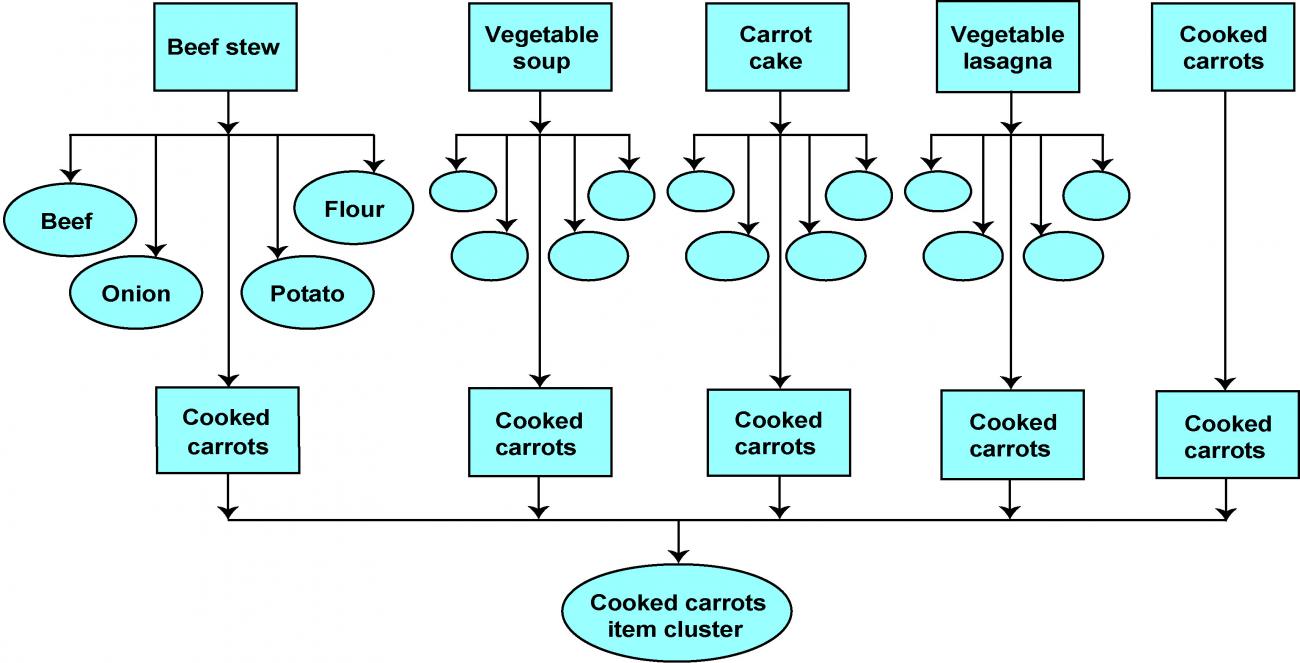 Methods (specific methods for this analysis)

The rationale for the current analysis is to determine if the USDA food patterns, as presented in the 2010 Dietary Guidelines, but with updated nutrient profiles for each food group, based on more recent food consumption and nutrient composition data, continue to meet nutritional goals for adequacy and moderation while staying within the established calorie targets.

1 The large number of clusters in the milk group was developed to provide a description of how milk products are consumed, in addition to use in calculating a nutrient profile. Many clusters are represented by the same nutrient-dense form of milk, cheese, or yogurt.

The nutrient profiles of each food group have changed over time for several reasons. First, the nutrients for representative foods may have been updated by the NDL. Second, a new food may have been selected as the representative food for an item cluster if it was a more nutrient-dense choice and still was an appropriate food to represent the item cluster. Third, the Food Pattern Equivalents for the representative food may have changed, due to a new streamlined system for calculating equivalents that has been put into place. Finally, the relative consumption of various item clusters within the food group may have changed, so that more weight was given to different foods within the group. Table 4 compares the energy content of each 2015 food group or subgroup with the energy content of comparable groups in 2005 and 2010.

Calories in the food patterns

For all food patterns, when using the nutrients and calories from representative foods that are in nutrient-dense forms, the sum of the calories from recommended amounts of each food group and oils (“essential calories”) was less than the caloric goal for the pattern. The remaining calories are assigned to a maximum limit for calories from solid fats and added sugars, as shown in Table 5. Table 5 also identifies how the limit was apportioned between amounts of solid fats and added sugars, for the purpose of calculating macronutrient proportions.

1 Calories in pattern if all foods are consumed in nutrient-dense forms, without additional solid fats or added sugars.

3 Calculated as 55% of calories from solid fats and 45% from added sugars, based on mean population intakes (NCI Usual Intakes data for NHANES 2007-10).

4 Calculated using caloric values of 8.4 kcal per 1 gram of solid fats and 4 kcal per gram of added sugars.

Figure 3 shows a sample comparison of recommendations to usual intakes for vegetables. Recommended vegetable intakes are above the 95th percentile for girls 9 to 13 and 14 to 18. Intakes for most males up to the age of 30 are at the 95th percentile. The graph shows that usual intakes of vegetables are higher in older men and women, while due to lower calorie needs the recommended amounts drop with age. In all cases, recommended intake of vegetables are above the median intake levels.

Figure 3. Recommended amounts of vegetables in the 2015 USDA Food Patterns, in comparison to usual intakes by age/sex groups in the 2007-2010 WWEIA/NHANES. 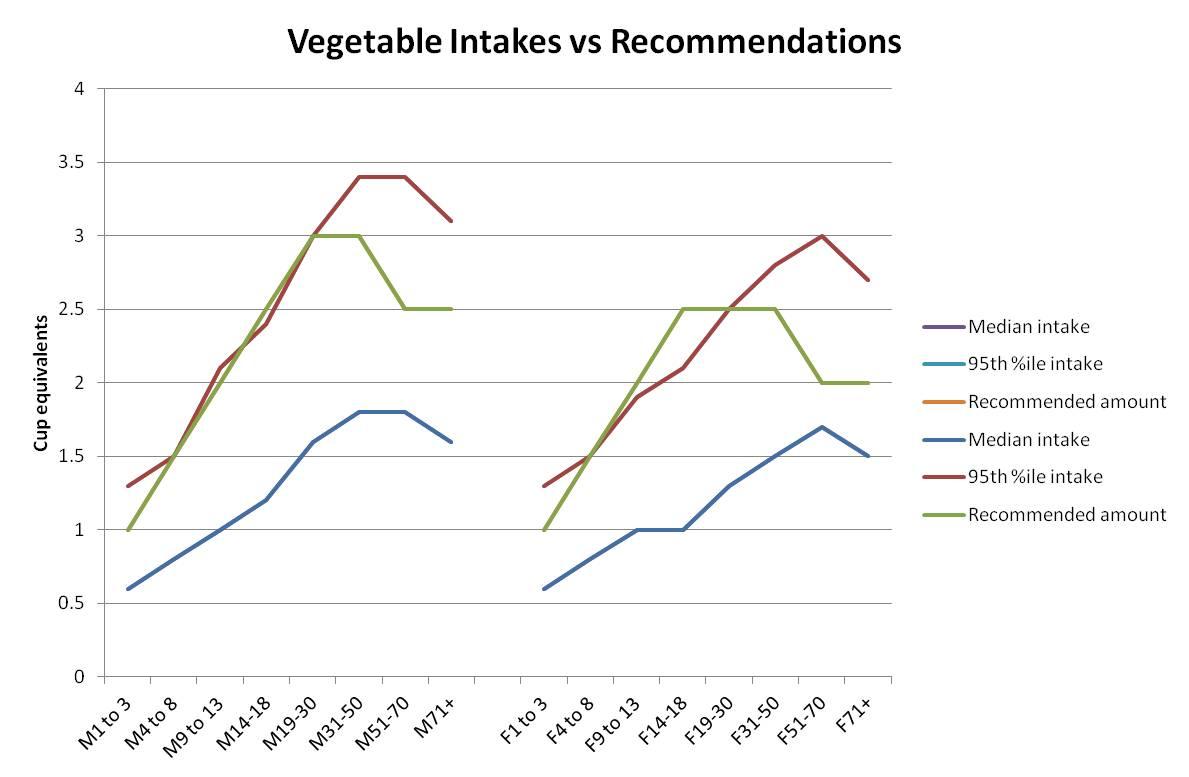 As shown in Figure 4, for many nutrients,, amounts of a nutrient in the patterns are well above the RDA or AI. Protein, phosphorus, zinc, copper, selenium, manganese, vitamin C, thiamin, riboflavin, niacin, vitamin K, folate, vitamin B6, and vitamin B12are above the goal amounts for all age/sex groups.

In contrast, some nutrients are just above the RDA or AI, or marginally below (90 to 100% of goal) goal amounts for several age/sex groups. For example, amounts of calcium in the patterns are marginal for children ages 4 to 8 (98% RDA), 9 to 13 (97% RDA), and girls 14-18 (97% RDA). Amounts of iron are marginal for women 19-50 (91-93% RDA), and magnesium is marginal for girls 14-18 (94% RDA) and women over 50 (97% RDA). In addition, magnesium is low for men over 50 (84% RDA). Note that percents of the RDA shown are for the lowest calorie level assigned to these age/sex groups—the level applicable for a sedentary/less active physical activity level. In comparison to EARs, which are the appropriate targets for assessment of adequate intakes in populations, amounts in all patterns meet the EARs for calcium, iron, and magnesium. However, no patterns meet the EAR for vitamin D. 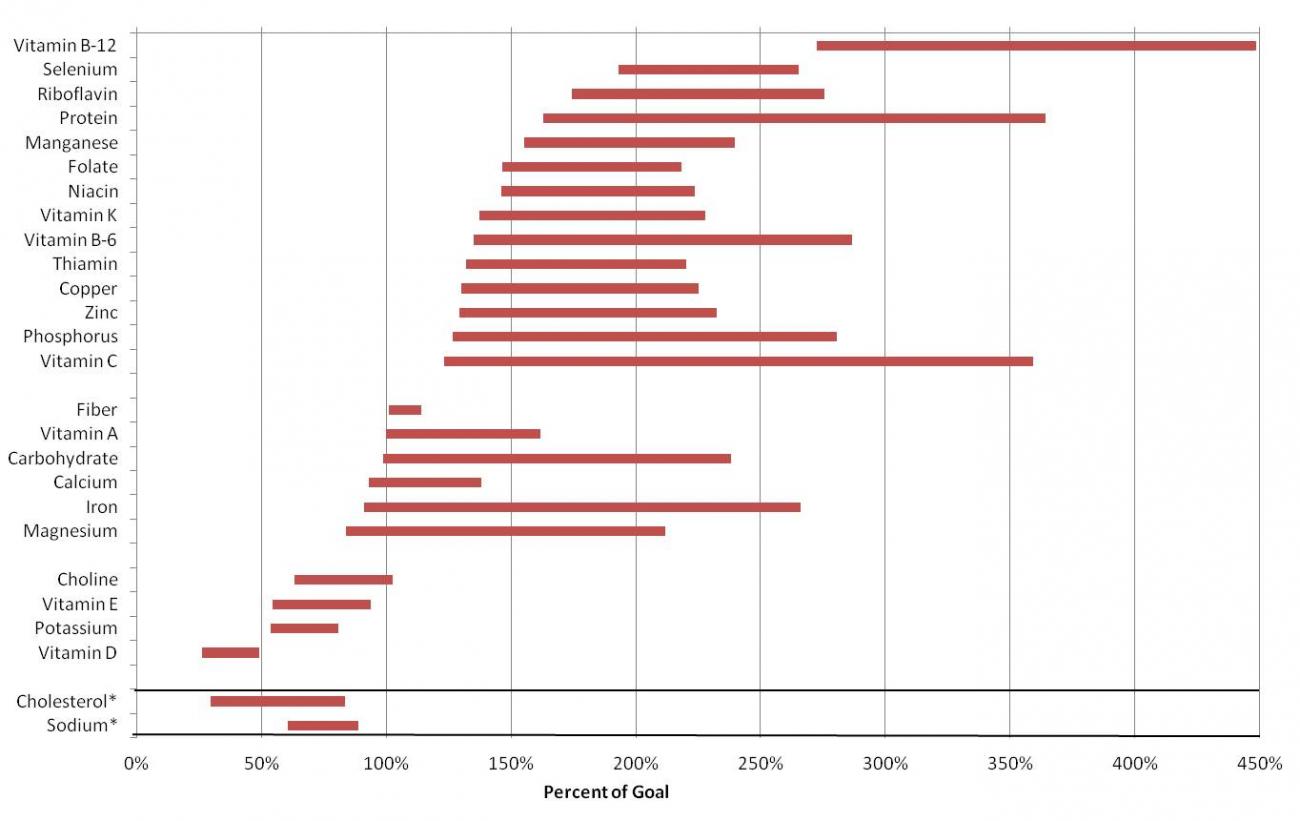 The nutrients for which adequacy goals are not met in almost all patterns are potassium, vitamin D, vitamin E, and choline. Potassium levels are less than 90% the AI in the patterns up through 2600 calories. Vitamin D amounts in the patterns range from 26% to 52% of the RDA. Vitamin E amounts are low for most age/sex groups except for active teen boys and men needing 2800 calories or more. Choline amounts range from 63% to 86% of the AI.

The nutrients that were well above, at, or marginally below, and below the RDA or AI are the same as in 2010. Due to the new higher RDA for vitamin D, amounts in the patterns are a much smaller percentage of the RDA than previously. To meet vitamin D recommendations while following the food group recommendations of the USDA Food Patterns, careful selection of specific foods within each food group would be needed, to include natural sources of D and foods fortified with D every day.

The patterns also meet almost all of their nutrient goals for moderation. The patterns at the three highest calorie levels (2800 to 3200 kcal) have more than the UL for sodium of 2300 mg (2345 to 2392 mg). In addition, all patterns are above the sodium AI for the age/sex group for which they are targeted. Only the patterns from 1000 to 1400 calories, designed for children 8 and younger, have less than 1500 mg of sodium. Saturated fat ranges from 7% to 9% of calories, with patterns at most calorie levels at 8% of calories. The 3200 calorie pattern is above the 35% of calories from fat upper boundary, with 36% of calories from fat. All other moderation goals are met. The moderation goals that were met or not met are also the same as in 2010.

Note:  Results for all nutrients at all calorie levels are provided in Appendix Tables E-3.1.A6 and E-3.1.A7.

The USDA Food Patterns have been updated using the most current food composition and food intake data available, and have been compared to current nutrient standards for adequacy and moderation. The USDA food patterns at 12 calorie levels meet almost all of their nutritional goals for adequacy. The nutrients for which adequacy goals are not met are potassium, vitamin D, vitamin E, and choline in almost all patterns. The patterns also meet almost all of their nutrient goals for moderation. Recommended amounts for all food groups and components fall, in general, within the 5th and 95th percentiles of usual intake distributions.

E-3.1.A6: Nutrients in the USDA Healthy US-Style Food Patterns at each calorie level

E-3.1.A7: Comparison of nutrient content of each USDA Healthy US-style Food Pattern to the nutritional goals for that pattern.

What We Eat in America (WWEIA), National Health and Nutrition Examination Survey 2009-10. Available at https://www.ars.usda.gov/northeast-area/beltsville-md-bhnrc/beltsville-human-nutrition-research-center/food-surveys-research-group/docs/wweianhanes-overview/