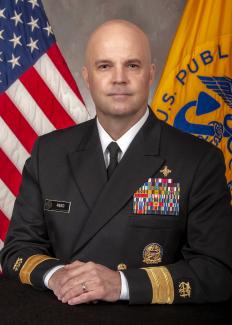 Office of the Assistant Secretary for Health
Department of Health and Human Services
Washington, DC

Rear Admiral (RDML) Paul Reed’s primary responsibility is to advise the Assistant Secretary for Health on disease prevention and health promotion programs and policies pursuant to Title XVII, Section 1701, of the Public Health Service Act. Additionally, RDML Reed provides direction and oversight for national health initiatives such as Healthy People 2030, the Dietary Guidelines for Americans, the Physical Activity Guidelines for Americans, and the President’s Council on Sports, Fitness & Nutrition.

Previously, RDML Reed served as the Deputy Assistant Secretary for Medicine and Science within the Office of the Assistant Secretary for Health. In this role, he provided oversight, direction, and coordination of activities requiring expert medical analysis and advice, particularly those concerning policy, planning, formulation, and presentation of public health issues affecting HHS. He has held numerous leadership roles within HHS, including positions within the Office of the Surgeon General, the Division of the Civilian Volunteer Medical Reserve Corps, and the U.S. Public Health Service. He has also coordinated the readiness and deployment of Commissioned Corps officers for domestic and international operations for humanitarian assistance, disaster relief, civic assistance, emergency response, and training.

During his nearly 5-year tenure as an Associate Professor of Global Health in the F. Edward Hebert School of Medicine at the Uniformed Services University, then CAPT Reed also held leadership positions as the Deputy Director at the National Center for Disaster Medicine and Public Health and as the Interim Center Director and Director for Doctrine and Strategic Partnerships at the Center for Global Health Engagement.

RDML Reed began his career as a uniformed medical officer with the U.S. Navy in 1994 after graduating from the Boston University School of Medicine. He served in this capacity for over 14 years, culminating as the Department Head of Pediatrics at the National Naval Medical Center in 2008. His clinical practice was in primary general pediatric care and pediatric rheumatology.