What is the relationship between intake of saturated fat and risk of cardiovascular disease?

Strong and consistent evidence from RCTs and statistical modeling in prospective cohort studies shows that replacing SFA with PUFA reduces the risk of CVD events and coronary mortality. For every 1 percent of energy intake from SFA replaced with PUFA, incidence of CHD is reduced by 2 to 3 percent. However, reducing total fat (replacing total fat with overall carbohydrates) does not lower CVD risk. Consistent evidence from prospective cohort studies shows that higher SFA intake as compared to total carbohydrates is not associated with CVD risk.

Evidence is limited regarding whether replacing SFA with MUFA confers overall CVD (or CVD endpoint) benefits. One reason is that the main sources of MUFA in a typical American diet are animal fat, and because of the co-occurrence of SFA and MUFA in foods makes it difficult to tease out the independent association of MUFA with CVD. However, evidence from RCTs and prospective studies has demonstrated benefits of plant sources of monounsaturated fats, such as olive oil and nuts on CVD risk.

The Committee drew evidence from SRs or MA published between January 2009 and August 2014 in English in a peer-reviewed journal, which included RCTs and/or prospective cohort studies. Participants included healthy volunteers as well as individuals at elevated chronic disease risk. The main exposure was SFA, and the main outcomes included LDL-cholesterol (LDL-C), HDL-cholesterol (HDL-C), triglycerides (TG), blood pressure (BP), and incidence of CVD, CVD-related death, myocardial infarction, or stroke. All reviews were high-quality, with ratings ranging from 8 to 11 on AMSTAR. The Committee drew evidence on blood lipids and blood pressure outcomes from the 2013 AHA/ACC Guideline on Lifestyle Management to Reduce Cardiovascular Risk and the NHLBI Evidence Report on Lifestyle Interventions to Reduce Cardiovascular Disease Risk1, which included primarily RCTs on intermediate CVD risk factors. The Committee drew evidence on CVD endpoints and effect size estimates from seven published MA that included one or more studies not covered in these reports.2 3 4 5 6 7 8 Little evidence on the contribution of SFA to cardiovascular risk factors in the pediatric populations was available, and that which was published has not been systematically reviewed.

Effects of Replacing SFA on LDL-C, HDL-C, and TG

Macronutrients may affect plasma lipids and lipoproteins, which are strong predictors of CVD risk. The NHLBI Lifestyle Report summarized evidence from three feeding trials examining effects on LDL-C of dietary patterns with varying SFA levels: DASH (Dietary Approaches to Stop Hypertension), DASH-Sodium, and DELTA (Dietary Effects on Lipoproteins and Thrombogenic Activity). The results from these trials indicate that reducing total and saturated fat led to a significant reduction in LDL cholesterol in the context of the DASH dietary pattern and the National Cholesterol Education Program (NCEP) Step 1 diet.  To estimate the effects of replacing SFA by specific macronutrients such as carbohydrates, MUFA, or PUFA, the NHLBI Lifestyle Report also included two MA from Mensink and Katan (n=1,672), covering the period from 1970 to 1998 (27 controlled trials in the first MA and 60 controlled trials in the second MA) and using the same inclusion/exclusion criteria to estimate changes in plasma lipids when substituting dietary SFA with carbohydrates or other fat types and holding dietary cholesterol constant.9 10 Mensink and Katan found that replacing 1 percent of SFA with an equal amount of carbohydrates, MUFA, or PUFA led to comparable LDL-C reductions: 1.2, 1.3, and 1.8 mg/dL, respectively. Replacing 1 percent of SFA with carbohydrates, MUFA, or PUFA also lowered HDL-C by 0.4, 1.2, and 0.2 mg/dL, respectively. Replacing 1 percent of carbohydrates by an equal amount of MUFA or PUFA raised LDL-C by 0.3 and 0.7 mg/dL, raised HDL-C by 0.3 and 0.2 mg/dL, and lowered TG by 1.7 and 2.3 mg/dL, respectively. The 2003 MA by Mensink and Katan10 indicated that the ratio of total to HDL-C, a stronger predictor of CVD risk than total or LDL cholesterol alone, did not change when SFA was replaced by carbohydrates, but the ratio significantly decreased when SFA was replaced by unsaturated fats, especially PUFA.

In summary, strong and consistent evidence from RCTs shows that replacing SFA with unsaturated fats, especially PUFA, significantly reduces total and LDL cholesterol. Replacing SFA with carbohydrates also reduces total and LDL cholesterol, but significantly increases TG and reduces HDL cholesterol. However, the evidence of beneficial effects on one risk factor does not rule out neutral or opposite effects on unstudied risk factors. To better assess the overall effects of intervention to reduce or modify SFA intake, studies of clinical endpoints are summarized below.

A MA by Skeaff et al. in 2009 included 28 U.S. and European cohorts (6,600 CHD deaths among 280,000 participants) and found no clear relationship between total or SFA intake and CHD events or deaths.8 Similarly, Siri-Tarino et al., 2010 found that SFA intake was not associated with risk of CHD, stroke or cardiovascular disease.7 The Siri-Tarino et al., 2010 meta-analysis included data from 347,747 participants (11,006 developed CVD) in 21 unique studies, with 16 studies providing risk estimates for CHD and 8 studies providing data for stroke as an endpoint. In the 2012 MA of trials to reduce or modify intake of SFA, Hooper et al. also found no significant associations of total fat reduction with cardiovascular events or mortality. Consistent with these prior studies, Chowdhury et al.’s 2014 MA of total SFA also did not specify what macronutrient substituted SFA and again found no association of dietary SFA intake, nor of circulating SFA, with coronary disease.2 Chowdhury et al. included data from 32 observational studies (530,525 participants) of fatty acids from dietary intake, 17 observational studies (25,721 participants) of fatty acid biomarkers, and 27 RCTs (103,052 participants) of fatty acid supplementation.

Hooper et al.’s 2012 Cochrane MA of trials of SFA reduction/modification found that reducing SFA by reducing and/or modifying dietary fat reduced the risk of cardiovascular events by 14 percent (pooled RR = 0.86; 95% CI = 0.77 to 0.96, with 24 comparisons and 65,508 participants of whom 7 percent had a cardiovascular event, I= 50%).4 Subgroup analyses revealed this protective effect was driven by dietary fat modification rather than reduction and was only apparent in longer trials (2 years or more). Despite the reduction in total cardiovascular events, there was no clear evidence of reductions in any individual outcome (total or non-fatal myocardial infarction, stroke, cancer deaths or diagnoses, diabetes diagnoses), nor was there any evidence that trials of reduced or modified SFA reduced cardiovascular mortality. These results suggest that modifying dietary fat by replacing some saturated (animal) fats with plant oils and unsaturated spreads may reduce risk of heart and vascular disease.

Emphasizing the benefits of replacement of saturated with polyunsaturated fats, Mozaffarian et al., 2010 found in a MA of 8 trials (13,614 participants with 1,042 CHD events) that modifying fat reduced the risk of myocardial infarction or coronary heart disease death (combined) by 19 percent (RR = 0.81; 95% CI = 0.70 to 0.95; p = 0.008), corresponding to 10 percent reduced CHD risk (RR = 0.90; 95% CI = 0.83 to 0.97) for each 5 percent energy of increased PUFA.6 This magnitude of effect is similar to that observed in the Cochrane MA. In secondary analyses restricted to CHD mortality events, the pooled RR was 0.80 (95% CI = 0.65 to 0.98). In subgroup analyses, the RR was greater in magnitude in the four trials in primary prevention populations but non-significant (24 percent reduction in CHD events) compared to a significant reduction of 16 percent in the four trials of secondary prevention populations. Mozaffarian et al. argue that the slightly greater risk reduction in studies of CHD events, compared with predicted effects based on lipid changes alone, is consistent with potential additional benefits of PUFA on other non-lipid pathways of risk, such as insulin resistance. Many of the included trials used vegetable oils containing small amounts of plant-derived n-3 PUFA in addition to omega-6 PUFA.

Taken together, strong and consistent evidence from RCTs and statistical modeling in prospective cohort studies shows that replacing SFA with PUFA reduces the risk of CVD events and coronary mortality. For every 1 percent of energy intake from SFA replaced with PUFA, incidence of CHD is reduced by 2 to 3 percent. The evidence is not as clear for replacement by MUFA or replacement with carbohydrate, and likely depends on the type and source.

When individuals in natural settings reduce calories from SFA, they typically replaced them with other macronutrients, and the type and source of the macronutrients substituting SFA determine effects on CVD. For this reason, studies specifying the macronutrient type replacing SFA are more informative than those examining only total SFA intake, and the strongest and most consistent evidence for CVD reduction is with replacement of SFA with PUFA in both RCTs and observational studies.

The differing effects of the type and source of macronutrient substituted may be one reason for the limited evidence regarding whether replacing SFA with MUFA confers CVD benefits and the lack of benefit from carbohydrate substitution. The main sources of MUFA in a typical American diet are animal fats, which could confound potential benefits of SFA-replacement with plant-source MUFA, such as nuts and olive oil, which have demonstrated benefits on CVD risk. To date, evidence testing replacement of SFA by MUFA from different sources is insufficient to reach a firm conclusion. Similarly, most analyses did not distinguish between substitution of saturated fat by different types of carbohydrates (e.g., refined carbohydrate vs. whole grains).

Of the RCTs included in this evidence summary, the intervention methods used varied from long-term dietary counseling with good generalizability but variable compliance, to providing a whole diet for weeks (e.g., controlled feeding studies) with maximal compliance but limited generalizability. Though the content of the recommended or provided diet is known with greater precision in the RCTs than in observational studies, adherence to the diet is likely variable and could result in lack of compliance and high rates of dropout in long-term trials. Additionally, bias may arise from the lack of blinding in non-supplement dietary intervention trials.

In prospective observational studies, misclassification of dietary fatty acid intake could bias associations towards the null. In addition, residual confounding by other dietary and lifestyle factors cannot be ruled out through statistical adjustment. Despite these methodological issues, there is high consistency of the evidence from prospective cohort studies and RCTs in supporting the benefits of replacing saturated fat with unsaturated fats especially PUFA in reducing CVD risk.

Table 1. Summary of existing reports, systematic reviews, and meta-analyses examining the relationship between the intake of saturated fat and risk of cardiovascular disease

* A measurement tool for the ‘assessment of multiple systematic reviews’ (AMSTAR)

** Reference overlap: In total, 166 articles were considered in these reviews, of which 24 were included in two or more reviews. 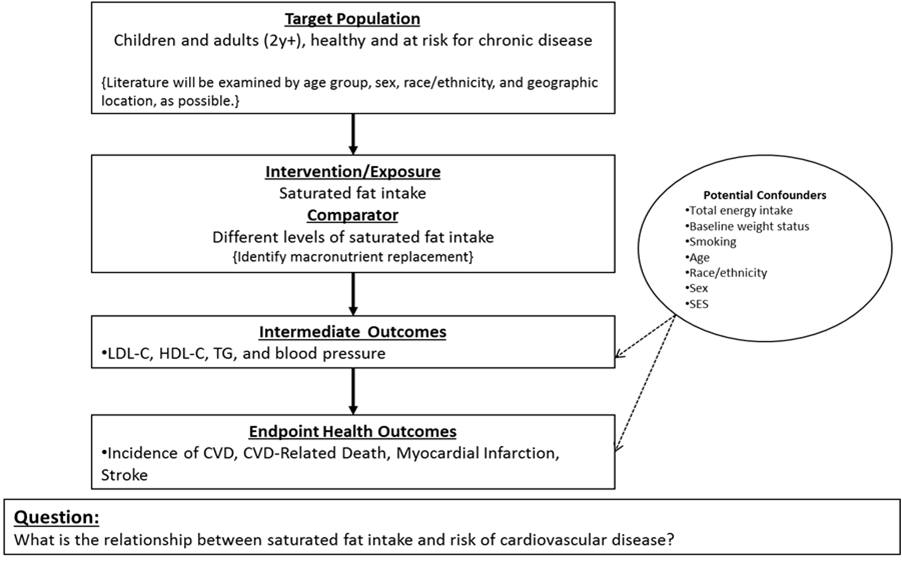 This question was answered using the National Heart, Lung, and Blood Institute Systematic Evidence Review from the Lifestyle Work Group, 2013 and related AHA/ACC Guideline on Lifestyle Management to Reduce Cardiovascular Risk,1 which focused on randomized controlled trials (RCTs), as well as existing SRs and MA addressing this question published in peer-reviewed literature between January 2009 and August 2014. Particular emphasis was placed on reviews that examined the macronutrient replacement for saturated fat. 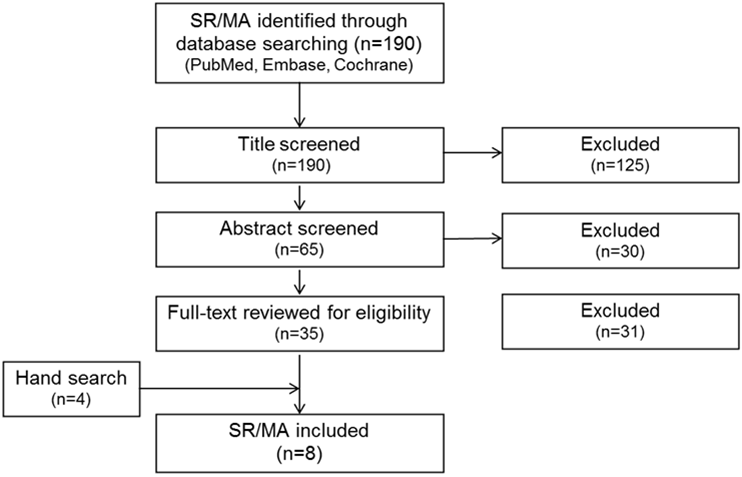