What is the relationship between high-dose caffeine consumption and health?

Conclusion Statement: Evidence on the effects of excessive caffeine intake on the health of adults or children (>400 mg/day for adults; undetermined for children and adolescents) is limited. Some evidence links high caffeine intake in the form of energy drinks to certain adverse outcomes, such as caffeine toxicity and cardiovascular events. Randomized controlled trials (RCTs) on the relationship between high-caffeine energy drinks and cardiovascular risk factors and other health outcomes report mixed results. Evidence also is limited on the health effects of mixing alcohol with energy drinks, but some evidence suggests that energy drinks may mask the effects of alcohol intoxication, so an individual may drink more and increase their risk of alcohol-related adverse events.

The main sources of caffeine among both adults and children are coffee, tea, and carbonated soft drinks. Another product, which has received a lot of attention recently as a potential source of excessive caffeine intake, especially among younger populations, is energy drinks (Pomeranz et al, 2013). An energy drink is a beverage that contains caffeine as its active ingredient, along with other ingredients such as taurine, herbal supplements, vitamins, and sugar. It is usually marketed as a product that can improve energy, stamina, athletic performance, or concentration (Seifert et al, 2011). Energy drinks have recently evaded oversight and regulation due to their variable, sometimes excessively high caffeine content (from 50 to 505 mg per can/bottle, with caffeine concentrations anywhere between 2.5 to 171 mg per fluid ounce) (Reissig et al, 2009), which is not regulated by the FDA due to the classification of energy drinks as dietary supplements (Seifert et al, 2011).

Health organizations including the American Academy of Pediatrics, the International Society of Sports Nutrition, and the American Medical Association have issued position statements on energy drinks, advising limited/no consumption among children and adolescents. Given the increasing evidence pointing towards harmful effects of excessive caffeine consumption, the FDA requested the Institute of Medicine (IOM) convene a workshop examining the science behind safe levels of caffeine intake. A report summarizing this workshop was recently published (Institute of Medicine, 2014). Its main conclusions were: 1) Children and adolescents are a potential vulnerable group, in whom caffeine intake could have detrimental health consequences. This is particularly important given insufficient data on caffeine consumption in this demographic, which is increasingly getting exposed to new modes of caffeine intake such as energy drinks; 2) Not enough is understood about potential interactions between caffeine and other ingredients commonly found in caffeine containing foods and beverages; and 3) More research is needed on identifying individual differences in reactions to caffeine, and vulnerable populations, including children with underlying heart conditions, and individuals with genetic predispositions to heart conditions.

The Center for Disease Control (CDC) recently reported on trends in caffeine intake over the past decade (1999-2010) among US children, adolescents, and young adults (Branum 2014). The CDC found that although energy drinks were not widely available prior to 1999, energy drinks made up nearly 6% of caffeine intake in 2009–2010, indicating fast growth in US consumption over a short period of time. When energy drink consumption was assessed in a nationally-representative sample of US secondary school students (Terry-McElrath 2014), 35% of 8th graders, 30% of 10th graders, and 31% of 12th graders consumed energy drinks or shots, and consumption was higher for adolescent boys than girls. Furthermore, energy drink use was associated with higher prevalence of substance use, as assessed for all grades of US secondary students.

Furthermore, a serious issue of public health concern has been the popular trend of combining energy drinks with alcoholic beverages. In 2010, the FDA determined that caffeine added to alcoholic beverages was not generally recognize as safe (GRAS), leading to withdrawal of premixed, caffeinated alcoholic beverages from the market (Arria and O’Brian 2011). Currently, Health Canada caps caffeine levels for energy drinks at 100 mg/250 ml (~1 cup) and has determined that an energy drink container that cannot be resealed be treated as a single-serving container. They have also mandated that manufacturers add a warning to labels that energy drinks should not be combined with alcohol. Recently, the CDC has made public statements on the dangers of mixing alcohol and energy drinks. They indicate that high amounts of caffeine in energy drinks can mask the intoxicating effects of alcohol, while at the same time they have no effect on the metabolism of alcohol by the liver. Therefore, high amounts of caffeine in energy drinks may result in an “awake” state of intoxication, thus increasing the risk of alcohol-related harm and injury (http://www.cdc.gov/alcohol/fact-sheets/cab.htm, March 2014).

Several short-term randomized controlled trials (RCTs) have examined the health effects of energy drink consumption. All of these have been carried out in adult populations, probably due to ethical constraints in providing energy drinks to children. Burrows et al (2013) recently published a systematic review of RCTs examining this question. They found 15 such RCTS, examining the effect of variable doses of energy drinks (mean dose: one and a half 250ml cans per study session) with differing ingredient combinations and concentrations on a number of different health outcomes. The high variability in exposure and outcome definitions made a meta-analysis infeasible. Overall, they found no consistent effects of energy drinks on cardiorespiratory outcomes (heart rate, arrhythmias, blood pressure), pathological outcomes (blood glucose, blood lactate, free fatty acids, clinical safety markers), and body composition, with some studies showing positive, some inverse, and some no associations. For many of these outcomes, consistent results could not be stated due to only one study reporting on them. There was a slight indication of a potential positive effect of energy drinks on physiological outcomes (run time to exhaustion, peak oxygen uptake, resting energy expenditure); however the authors concluded that more studies were needed before arriving at a definitive conclusion. Two of the studies assessed the simultaneous ingestion of alcohol and energy drinks (Ferreira 2006; Wiklund 2009). One found that when compared with the ingestion of alcohol alone, the addition of an energy drink reduced individuals’ perception of impairment from alcohol, while at the same time, objective measures indicated ongoing deficits in motor coordination and visual acuity (Ferreira 2006). Nor did energy drinks reduce breath alcohol concentration, indicating no change or increase in alcohol metabolism by the liver. Another study on energy drinks in combination with alcohol and exercise showed that during post-exercise recovery there was no effect on arrhythmias within 6 hours of energy drink ingestion in healthy young adults (Wiklund 2009).

There are several issues with many of the above studies, such as lack of a true control group (water or no drink), a very short follow-up duration of only a few hours, and small sample sizes, which could explain the inconsistent findings. In addition, many of these studies did not report whether they were commercially funded. Several of those that did report funding sources had financial conflicts of interest. Lastly, the doses of energy drinks used in these studies were not too high, resulting in caffeine intake levels that fell within the normal range. It is possible that excessive caffeine intake due to heavy energy drink consumption adversely impacts several health outcomes, but this hypothesis was not clearly addressed by these studies. Hence it is difficult to ascertain the impact of excessive caffeine intake on health outcomes on the basis of these RCTs. There is also very little data on the health effects of excessive caffeine consumption in pediatric populations.

Table 1. Summary of Studies on High-dose Caffeine Consumption and Health

References included in the review

References not included in the review 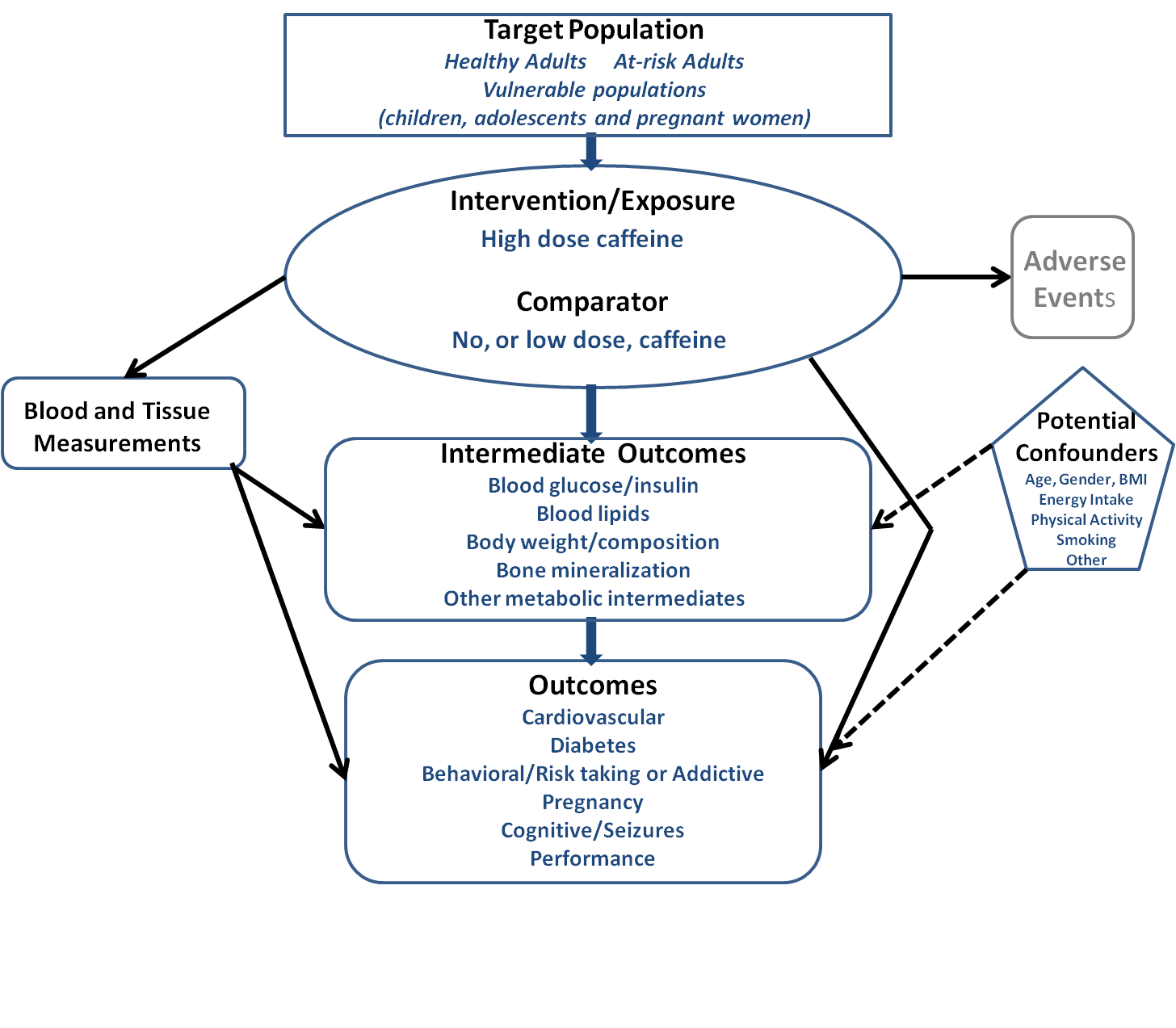