Weigh in on a proposed new objective for Healthy People 2030! Send us your comments by December 2, 2022.

Systematic Review Question 1: What are the comparative nutrient profiles of current farm-raised versus wild caught seafood?

Conclusion Statement: For commonly consumed fish species in the United States, such as bass, cod, trout, and salmon, farmed-raised fish have as much or more of the omega-3 fatty acids EPA and DHA as the same species captured in the wild. In contrast, farmed low-trophic species, such as catfish and crawfish, have less than half the EPA and DHA per serving than wild caught, and these species have lower EPA and DHA regardless of source than does salmon. Farm-raised fish have higher total fat than wild caught. Recommended amounts of EPA and DHA can be obtained by consuming a variety of farm-raised fish, especially high-trophic species, such as salmon and trout.

The terms “seafood” and “fish” are used interchangeably in this report to refer to animal-based foods harvested from aqueous environs.  There are more than 500 species in the major groups commonly referred to as finfish, shellfish, and crustaceans and thus generalizations to all seafood must be made with caution. Seafood is recognized as an important source of key macro- and micronutrients. The health benefits of seafood, including optimal neurodevelopment and prevention of cardiovascular disease, are likely due in large part to long-chain n-3 polyunsaturated fatty acids (PUFA), docosahexaenoic acid (DHA) and eicosapentaenoic acid (EPA), although fish are good sources of other nutrients including protein, selenium, iodine, vitamin D, and choline (FAO/WHO report). Currently, seafood production is in the midst of rapid expansion to meet growing worldwide demand, but the collapse of some fisheries due to overfishing in past decades raises concerns about the ability to produce safe and affordable seafood to supply the population and meet current dietary intake recommendations of 8 ounces per week.  Capture fisheries (wild caught) production has stabilized in the proportion of fully exploited stocks, and this is due in part to national and international efforts to fish sustainably, e.g., the U.S. Magnuson-Stevens Fishery Conservation and Management Act (2006) mandating annual catch limits, managed by the U.S. National Oceanographic and Atmospheric Administration.  In contrast, the increased productivity of worldwide aquaculture (farm-raised) is expected to continue and will play a major role in expanding the supply of seafood (FOA/WHO report).  Growing aquaculture has the potential to provide for Americans consuming the recommended amount of seafood, without running out of the recommended amounts (NOAA).  Productivity gains should be implemented in a sustainable manner with attention to maintaining or enhancing the high nutrient density characteristic of captured seafood. Consistent with this, finfish aquaculture is more sustainable that terrestrial animal production in terms of GHG emissions and land/water use (Hall et al 2011; Bouman et al 2013). Currently, the US imports the majority of its seafood (~90%), and approximately half of that is farmed (NOAA).

The USDA-Agricultural Research Service (ARS) National Nutrient Database (NND) for Standard Reference, Release 27 was used to address this question (http://www.ars.usda.gov/ba/bhnrc/ndl). The section on finfish and shellfish products included nutrient profiles for both farm-raised and wild-caught seafood for some species. This data was augmented using a USDA-funded report on fatty-acid profiles of commercially available fish in the US that assessed more farmed species and compared results with the USDA-ARS NND (Cladis 2014).

The NND provides nutrient profiles for six seafood species with data on both wild-caught and farm-raised versions: four finfish (Rainbow Trout, Atlantic and Coho Salmon, catfish), eastern Oysters, and mixed species crayfish. Data from both sources on different species comparisons is compiled in Figure 1. Key nutrients EPA and DHA are on average comparable or greater for farmed trout, salmon, and oysters than for wild capture.  On the other hand, low trophic level species catfish and crayfish, when farmed, were lower in EPA and DHA compared to wild capture (Figure 1, *). In general, wild low trophic species have lower EPA and DHA than carnivorous fish but those harvested by wild capture have EPA and DHA that support existing DGAC recommendations for consumption of a variety of fish.  Cladis et al (Cladis 2014) determined EPA and DHA levels for five finfish (rainbow trout, white sturgeon, chinook salmon, Atlantic cod, striped bass) and presents similar results for these carnivorous species.

Systematic Review Question 2: What are the comparative contaminant levels of current farm-raised versus wild caught seafood?

Conclusion Statement: The DGAC concurs with the Joint WHO/FA) Consultancy that, for the majority of commercial wild and farmed species, neither the risks of mercury nor organic pollutants outweigh the health benefits of seafood consumption, such as decreased cardiovascular disease risk and improved infant neurodevelopment. However, any assessment evaluates evidence within a time frame and contaminant composition can change rapidly based on the contamination conditions at the location of wild catch and altered production practices for farmed seafood.

To address the question, the DGAC used the Report of the Joint United Nations Food and Agriculture Organization/World Health Organization Expert Consultation on the Risks and Benefits of Fish Consumption, Rome, 25–29 January 2010. FAO Fisheries and Aquaculture Report No. 978

The Report of the FAO/WHO Expert Consultation on the Risks and Benefits of Fish Consumption was used to address this question. This report was chosen as the most current and comprehensive source on contaminants in wild-caught and farm-raised fish, and the DGAC focused on data that addressed the specific comparison between the two. The sections of the report that were used to address the question were “Data on the composition of fish” and “Risk-benefit comparisons.” The consultancy took a net effects approach, balancing benefits of seafood, especially benefits associated with EPA and DHA, against the adverse effects of mercury and persistent organic pollutants (POPs), including polychlorinated biphenyls, polychlorinated dibenzo-p-dioxins, and polychlorinated dibenzofurans, collectively referred to as dioxins.  The Expert Consultancy compiled EPA and DHA, mercury, and dioxins compositional data from national databases of the United States, France, Norway, and Japan, as well as an international database. Together, these provided information on total fat, EPA and DHA, total mercury, and dioxins for a large number of seafood species, including three farmed and wild species (salmon, rainbow trout, and halibut). Two specific outcomes were considered for risk/benefit: 1) prenatal exposure and offspring neurodevelopment, and 2) mortality from cardiovascular diseases and cancer.

Albacore tuna, produced only from wild marine fisheries, is a special case of a popular fish highlighted by the 2004 FDA and EPA advisory.  For all levels of intake including more than double the 12 ounces per week recommendation, all evidence was in favor of net benefits for infant development and CHD risk reduction.

Limitations in the evidence included the small number of farmed and wild seafood species comparisons considered by the Expert Consultancy, and the possibility of rapid change that may occur in the concentration of contaminants locally. In addition, seafood contaminants are closely linked to levels of contaminants in feed.

For additional details on this body of evidence, visit:  Report of the Joint Food and Agriculture Organization of the United Nations (FAO) and the World Health Organization (WHO) Expert Consultation on the Risks and Benefits of Fish Consumption, 2011.

Systematic Review Question 3: What is the worldwide capacity to produce farm-raised versus wild-caught seafood that is nutritious and safe for the U.S. population?

Conclusion Statement: The DGAC concurs with the FAO report that consistent evidence demonstrates that capture fisheries increasingly managed in a sustainable way have remained stable over several decades. However, on average, capture fisheries are fully exploited and their continuing productivity relies on careful management to avoid over-exploitation and long-term collapse.

The DGAC endorses the FAO report that capture fisheries production plateaued around 1990 while aquaculture has increased since that time to meet increasing demand. Evidence suggests that expanded seafood production will rely on the continuation of a rapid increase in aquaculture output worldwide, projected at 33 percent increase by 2021, which will add 15 percent to the total supply of seafood. Distributed evenly to the world’s population, this capacity could in principle meet DGA recommendations for consumption of at least 8 ounces of seafood per week. Concern exists that the expanded capacity may be for low-trophic level fish that have relatively low levels of EPA and DHA compared to other species. Under the current production, Americans who seek to meet U.S. Dietary Guidelines recommendations must rely on significant amounts of imported seafood (~90%).

The production of capture fisheries has remained stable at about 90 million tons from 1990-2011. At the same time, aquaculture production is rising and will continue to increase. FAO model projections indicate that in response to the higher demand for fish, world fisheries and aquaculture production is projected to grow by 15 percent between 2011 and 2021. This increase will be mainly due to increased aquaculture output, which is projected to increase 33 percent by 2021, compared with only 3 percent growth in wild capture fisheries over the same period. It is predicted that aquaculture will remain one of the fastest growing animal food-producing sectors and will exceed that of beef, pork, or poultry. Aquaculture production is expected to expand on all continents with variations across countries and regions in terms of the seafood species produced. Currently, the United States is the leading importer of seafood products world-wide, with imports making up about 90 percent of seafood consumption. Continuing to meet Americans needs for seafood will require stable importation or substantial expansion of domestic aquaculture.

For additional details on this body of evidence, visit:  UN FAO report on The State of World Fisheries and Agriculture, 2012. http://www.fao.org/fishery/sofia/en 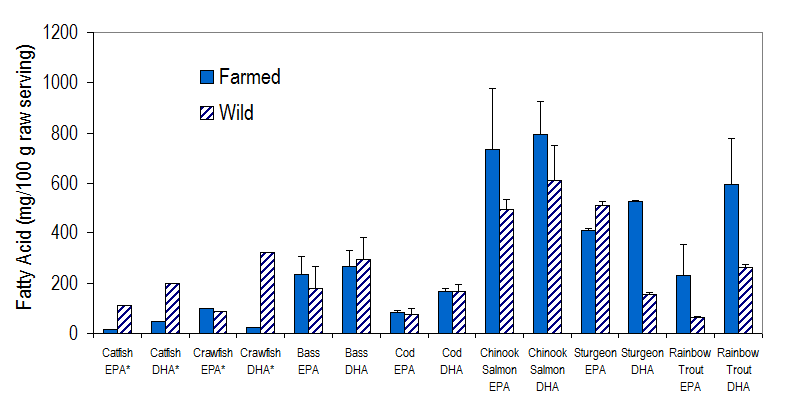 Table 1. Summary of Contaminants in Farm-raised and Wild-Caught Seafood

Analytical Framework for Seafood and Sustainability 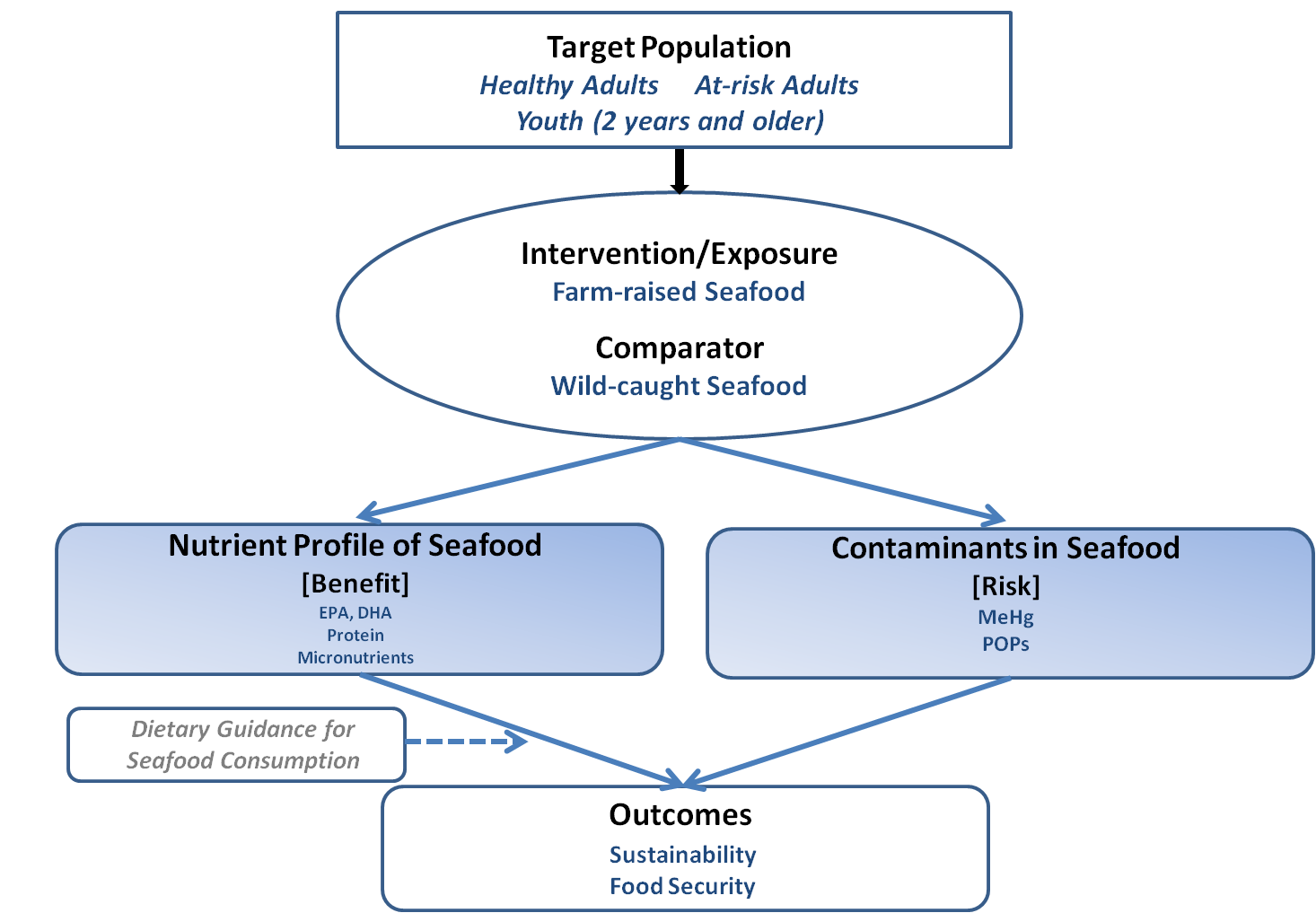