What is the relationship between dietary patterns and risk of type 2 diabetes?

Evidence is lacking for the pediatric population.

The Committee considered two sources of evidence. The primary source was the NEL Dietary Patterns Systematic Review Project which included 37 studies predominantly of prospective cohorts design and some randomized trials (n=8).1 This primary source was supplemented by a published meta-analysis that included 15 cohort studies of which 13 overlapped with the NEL review.2 The meta-analysis provided an estimate of the effect size of incident type 2 diabetes associated with a healthy and unhealthy dietary pattern.

Although the NEL rated the overall body of evidence for type 2 diabetes as limited, this was primarily a result of examining the different methods for defining dietary patterns (e.g. indices, data driven, and reduce rank regression) separately. As such, the NEL noted these methodological inconsistencies across studies but stated general support for the consumption of a dietary pattern rich in vegetables and fruits and low in high-fat dairy and meats. The DGAC concurred with this conclusion. However, the DGAC has elevated the grade of the entire body of evidence to moderate given that the NEL findings were corroborated by the results of a high quality meta-analysis (AMSTAR rating of 11) and the magnitude of the associations that showed when the results of 15 cohort studies are pooled, evidence indicated a 21 percent reduction in the risk of developing type 2 diabetes associated with dietary patterns characterized by high consumption of whole grains, vegetables, and fruit. Conversely, a 44 percent increased risk of developing type 2 diabetes was seen with an unhealthy dietary pattern characterized by higher consumption of red or processed meats, high-fat dairy, refined grains, and sweets.

One study used the DASH score in a cohort of 820 U.S. adults ages 40 to 69 years and with equal sex distribution and racial diversity.3 Liese et al. found adherence to the DASH score was associated with markedly reduced odds of type 2 diabetes in Whites but not in the total population, or in the Blacks and Hispanics, which comprised the majority of this cohort.

Three studies assessed Mediterranean-style dietary pattern adherence (Mediterranean Diet Score [MDS]) with sample sizes ranging from 5,000 to more than 20,000 in both Mediterranean and U.S. populations. One study conducted in Spain with the SUN cohort (n=13,380) found a favorable association between the MDS (the original MDS of Trichopoulou) and risk of type 2 diabetes. Overall, a 2-point increase in MDS was associated with a 35 percent reduction in risk of type 2 diabetes.4 Another study, conducted in Greece with the EPIC-Greece cohort (n=22,295), also assessed the relationship between the MDS and type 2 diabetes. In this second Mediterranean population, adherence to the MDS also was favorably associated with decreased risk of diabetes.5 Conversely, a study conducted in the United States, using the authors’ MedDiet Score with the Multi-Ethnic Study of Atherosclerosis (MESA) cohort (n=5,390) found no association between their MedDiet Score and type 2 diabetes incidence in the total population, in men or women, or in specific racial/ethnic groups.6

Dietary Indices based on the Dietary Guidelines

Four studies used dietary-guidelines based indices such as the AHEI and the Diet Quality Index (DQI). The sample sizes of the studies ranged from 1,821 to 80,029. A study that assessed adherence to the AHEI in the United States found a favorable association between AHEI score and risk of incident type 2 diabetes in women in the Nurses’ Health Study (n=80,029).7 In the CARDIA study (n=4,381), also from the United States, the authors found no association between DQI-2005 score and type 2 diabetes incidence in the total population or in Blacks or Whites.8 Studies from outside the United States included one conducted in Australia using a Total Diet score in the Blue Mountains Eye Study (BMES, n=1,821) and one from Germany using a German Food Pyramid Index with the EPIC-Potsdam cohort (n=23,531). Neither found an association between these scores and incident type 2 diabetes.9, 10 Thus, evidence for an association only exists with the AHEI, which does contain slightly different components from the other indices, such as nuts and legumes, trans fat, EPA + DHA (n–3 FAs), PUFAs, alcohol, red and processed meat.

Eleven studies used factor analysis and one study used cluster analysis. These analyses were all conducted using data from prospective cohort studies published between 2004 and 2012 and had sample sizes ranging from 690 to more than 75,000 individuals. Five studies were conducted in the United States and the rest from developed countries around the world. Each study identified one to four dietary patterns, with the most common comparison between "western"/"unhealthy" and "prudent"/"healthier" patterns; a total of 35 diverse dietary patterns were identified within the body of evidence. Many studies had null findings, particularly studies with duration of less than 7 years of follow up.11-14 Patterns associated with lower risk of type 2 diabetes were characterized by higher intakes of vegetables, fruits, low-fat dairy products, and whole grains, and those associated with increased risk were characterized by higher intakes of red meat, sugar-sweetened foods and drinks, French fries, refined grains, and high-fat dairy products. However, the food groups identified varied substantially, even among patterns with the same name.

Three prospective cohort studies used reduced rank regression to examine the relationship between dietary patterns and type 2 diabetes.15-17 Two of the studies were conducted in the United States and one in the United Kingdom. The sample sizes were 880 for Liese (2009), 2,879 for Imamura (2009), and 6,699 for McNaughton (2008). The independent variables in these studies were dietary pattern scores, and biomarkers were used as response variables in two of the studies. Dietary patterns that included meat intake and incident type 2 diabetes were positively associated in the two studies that used biomarkers as response variables, though the definitions of meat differed.15, 16 However, because so few studies were available and the methodology used and different populations considered varied so much, the information was insufficient to assess consistency or draw conclusions.

The body of evidence examined included seven studies conducted between 2004 and 2013, consisting of six RCTs18-24 and one prospective cohort study (PCS).25 Two studies were conducted in the United States; one in the United States and Canada; one in Spain (2 PREDIMED articles); and one each in Greece, Italy, and Sweden. The sample sizes of the RCTs ranged from 82 to 1,224 participants and the PCS had a sample size of 41,387 participants. All eight studies were conducted in adults. RCT duration ranged from 6 weeks to a median of 4 years and the PCS duration was 2 years. The RCTs were primary prevention studies of at-risk participants. Baseline health status in the study participants included those with mild hypercholesterolemia, overweight or obesity, metabolic syndrome, abdominal obesity, and three or more CVD risk factors, including metabolic syndrome. The PCS participants were individuals in the Adventist Health Study who did not have type 2 diabetes.25 Three studies looked at a Mediterranean-style diet,20, 22-24 one study examined the Nordic diet (defined by the authors of the study as a diet rich in high-fiber plant foods, fruits, berries, vegetables, whole grains, rapeseed oil, nuts, fish and low-fat milk products, but low in salt, added sugars, and saturated fats),18 and three studies looked at either the DASH diet or a variation of the DASH diet,19, 21 or a vegetarian diet.25

Two of the seven studies examined the association between adherence to a dietary pattern and incidence of type 2 diabetes.24, 25 Although the results of both studies showed a favorable association between either a Mediterranean-style or a vegetarian dietary pattern and incidence of type 2 diabetes the studies differed in design and dietary pattern used to assess diet exposure. The other studies examined the intermediate outcomes of impaired glucose tolerance and/or insulin resistance and are discussed in the next section.

Five studies examined adherence to a dietary pattern and intermediate outcomes related to glucose tolerance and/or insulin resistance: two RCTs26, 27 and three prospective cohort studies.8, 9, 28 It was difficult to assess food components across these studies, as numerous different scores were used and no compelling number of studies used any one score or index. Even so, favorable associations between dietary patterns and intermediate outcomes were found.

The two RCTs were conducted in populations in Europe that were at risk of diabetes. An early report from the PREDIMED trial showed that a Mediterranean diet decreased fasting blood glucose, fasting insulin, and HOMA-IR scores in a Spanish population at risk of CVD.26 In the Oslo Diet and Exercise Study (ODES), increased adherence to the authors’ a priori diet score resulted in decreased fasting insulin and insulin after a glucose challenge, but not fasting glucose, in Norwegian men with metabolic syndrome.27 Results from prospective cohort studies were consistent in showing a favorable association between diet score and fasting glucose, fasting insulin or HOMA-IR,8, 28 with the exception of one study that found the association with fasting glucose only in men.9

Table 1: Summary of existing reports, systematic reviews, and meta-analyses examining the relationship between dietary patterns and risk of type 2 diabetes

*A measurement tool for the ‘assessment of multiple systematic reviews’ (AMSTAR)

** Reference overlap: Of the 39 articles included in total across the reviews, 13 were included in both reviews.

(Note: The search and update for the dietary patterns and CVD, body weight, and type 2 diabetes reviews were done simultaneously and are described together below.) 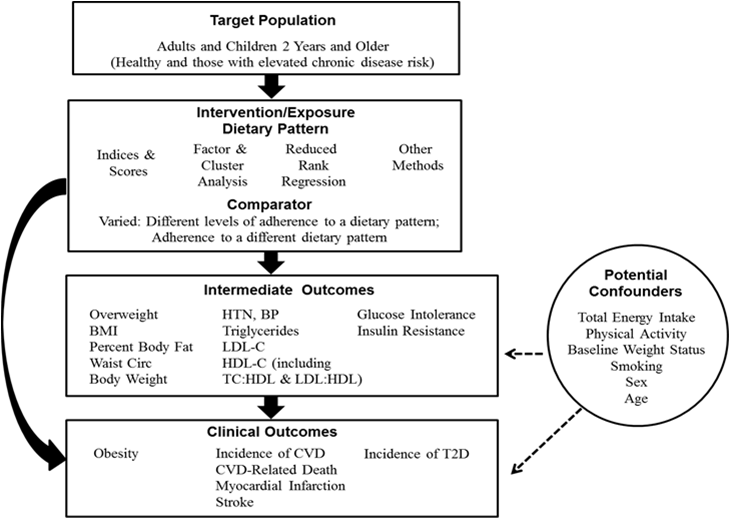 The questions examining dietary patterns and risk of CVD, obesity, and type 2 diabetes were answered using existing reports, systematic reviews, and meta-analyses. All three of these questions were addressed in the Nutrition Evidence Library (NEL) Dietary Patterns Systematic Review Project. This project was supported by USDA’s Center for Nutrition Policy and Promotion and was informed by a Technical Expert Collaborative of experts in dietary patterns research.1 Additionally, the DGAC reviewed reports from systematic reviews recently conducted by the National Heart, Lung, and Blood Institute (NHLBI) that included dietary patterns research. For CVD, the DGAC used the NHLBI Lifestyle Interventions to Reduce Cardiovascular Risk: Systematic Evidence Review from the Lifestyle Work Group and the associated American Heart Association (AHA)/ American College of Cardiology (ACC) Guideline on Lifestyle Management to Reduce Cardiovascular Risk.32 For body weight, the DGAC used the NHLBI Managing Overweight and Obesity in Adults: Systematic Evidence Review from the Obesity Expert Panel and the associated AHA/ACC/ The Obesity Society (TOS)Guideline for the Management of Overweight and Obesity in Adults.33 For all three questions, in an attempt to capture new research published since the searches for these systematic reviews were completed, the Committee considered existing systematic reviews and meta-analyses published in peer-reviewed journals since 2008. The existing systematic reviews and meta-analyses considered by the DGAC had to meet the general inclusion criteria of the DGAC, and were required to consider dietary patterns and the outcomes of interest.

(DASH OR (dietary approaches to stop hypertension) OR "Diet, Mediterranean"[Mesh] OR vegan* OR vegetarian* OR "Diet, Vegetarian"[Mesh] OR “prudent diet” OR “western diet” OR nordiet OR omniheart OR (Optimal Macronutrient Intake Trial to Prevent Heart Disease) OR ((Okinawa* OR "Ethnic Groups"[Mesh] OR “plant based” OR Mediterranean[tiab]OR Nordic) AND (diet[mh] OR diet[tiab] OR food[mh])))

(“insulin resistance”[mh] OR “insulin”[ti] OR inflammation[ti] OR glucose intoleran*[ti] OR "Glucose Intolerance"[Mesh] OR diabetes[ti] OR "Diabetes Mellitus, Type 2"[Mesh] OR "Hemoglobin A, Glycosylated"[Mesh] OR “hemoglobin A1c “[ti] OR (“impaired fasting” AND (glucose OR glycemi*)) OR “onset diabetes” OR “impaired glucose” OR “insulin sensitivity”)

AND limit to: systematic[sb] OR systematic review* OR meta-analys* OR meta analys* 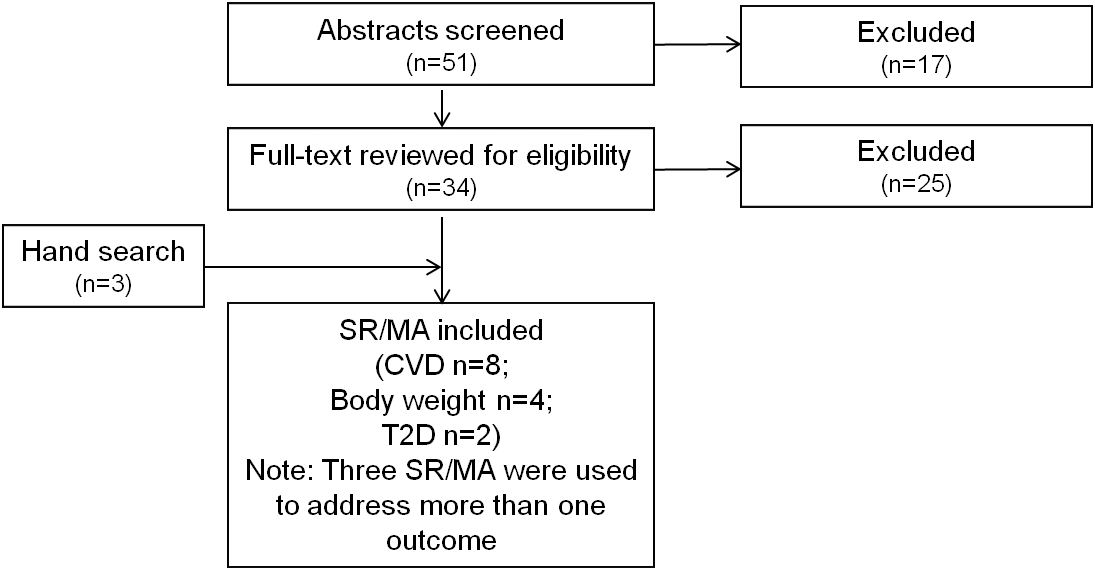