ODPHP is working with 4 pilot communities to implement the Move Your Way® campaign for specific audiences. Each community is focused on a specific population — teens, older adults, pregnant and postpartum people, or Spanish speakers.

Read on to learn how the Southern Nevada Health District is using the Move Your Way campaign to engage Spanish speakers in their community.

The Southern Nevada Health District (SNHD) serves a racially and ethnically diverse population of over 2 million residents in Southern Nevada. SNHD was 1 of 2 lead organizations during the first year of Move Your Way pilot testing and worked with a number of partners to successfully implement the campaign for people in Clark County, NV. When returning as a community pilot organization in 2021, SNHD capitalized on their prior work to help get Spanish-speaking residents moving.

Partnerships — Building on Past Success

Building on the success of their partnership efforts in 2019, SNHD continued to work with partners and coalition members in 2021. To kick off their focused campaign, SNHD engaged local leaders to formally declare March 1 to 6, 2021, “Move Your Way week.” During that week, SNHD asked community members to create social media posts about how they get active. To encourage participation, SNHD entered community members who posted about their physical activity into a drawing for activity-related prizes.

Throughout the rest of the campaign, SNHD worked with 14 partners in several community sectors, including parks and recreation, youth engagement, health care, and a university cooperative extension. “In order to reach our priority audience, especially during the COVID-19 pandemic, we needed to be intentional about who we collaborated with,” says Nicole Bungum, a supervisor in the Office of Chronic Disease Prevention and Health Promotion at SNHD. “Working with partners and coalition members, including promotoras (community health workers), allowed us to reach Spanish speakers in our community with voices that they trust and already engage with.”

Working with partners also allowed SNHD to take advantage of existing events and have the support to plan new large-scale events. For example, SNHD was able to participate in a Cinco de Mayo event in May 2021, which reached over 500 community members. The outdoor event showcased music, dancing, physical activity demonstrations, and a community health fair. Participants received a Move Your Way kit with fact sheets in Spanish and other health information. 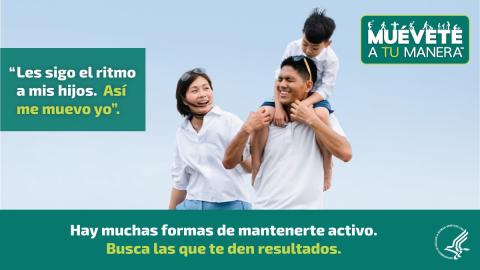 SNHD also distributed Spanish-language posters and fact sheets guiding Nevadans to Move Your Way’s Spanish-language consumer website and online activity planner. Beyond that, SNHD worked with a Spanish-speaking medical professional to host a virtual “Walk with a Doc” event. The walk participants joined a virtual presentation, held in Spanish by a local pediatrician, and then took a walk. The presentation covered recommendations for children in the Physical Activity Guidelines for Americans, the importance of physical activity, and available Move Your Way resources. Additionally, 770 people attended virtual exercise classes led by 2 popular Latina instructors.

Do you want to promote physical activity to members of your community who speak Spanish? Check out the Move Your Way campaign’s Spanish materials, including newly released Spanish social media messages for adults and parents.

Anyone — health educators, health care providers, other individuals, local health departments, and other organizations — can use the campaign’s sample messages, graphics, and GIFs to promote physical activity in their community. You can use the messages as is or adapt them to align with different events, priorities, and National Health Observances. Be sure to use the hashtag #MuéveteATuManera to connect to other campaign users and resources.