Due to COVID-19, pilot communities will be adapting their campaigns to help people stay safe while they get active. This series will highlight local events and initiatives from the community pilot program — including creative ways to promote physical activity during social distancing.

This first installment highlights a successful in-person community launch event that took place back in February in Sioux City, Iowa.

Sioux City, Iowa launched their Move Your Way community campaign on February 23, 2020. Rather than choosing an indoor venue for their midwinter launch, the Siouxland District Health Department (SDHD) partnered with the Healthy Siouxland Initiative on a family-friendly outdoor festival at Sioux City’s Cone Park.

Michelle Lewis, Health Promotion and Planning Coordinator at SDHD, says that winter is a great time for outdoor recreation. “You don't have to sit on your couch,” Lewis says. “You can get active and have fun in the winter months.”

The inaugural Cone Park Winterfest brought together more than 600 community members to get active and learn about the Move Your Way campaign. To help boost attendance, SDHD built the Winterfest around an annual homemade cardboard sled race hosted by the Port of Sioux City River-Cade Association and the Sioux City Noon Sertoma Club.

SDHD partnered with vendors like the local YMCA to offer a range of winter-themed activities, including a tubing hill and a snowman-making relay race. And Sioux City’s hockey team, the Sioux City Musketeers, stopped by to mingle with attendees.

Spreading the Word to Help People Get Active

Lewis says that reaching out to local media is key to a successful launch. About a month before the Winterfest, SDHD sent out a press release to generate interest from local news outlets — which led to 2 live TV interviews about the upcoming event. A second press release just before the event helped motivate local TV stations to come out and cover the festivities.

During the event, SDHD used Move Your Way posters and fact sheets to spread the word about the benefits of physical activity. Lewis says these benefits are especially important for the large proportion of Siouxlanders living with health conditions like obesity or diabetes. “The Move Your Way campaign materials are so fun and user friendly,” Lewis says. “We hope they’ll be the motivating factor to help people be more physically active in our community.”

Looking Ahead to a Healthier Future 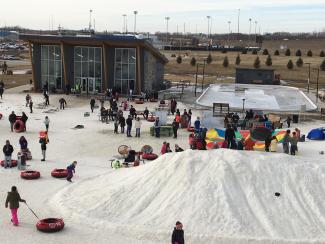 And with help from their strong coalition of partners, SDHD hopes to keep the Move Your Way momentum going throughout the year. “This event allowed us to lay the groundwork,” Lewis says. “So people may be more motivated to get out there and be physically active in the future.”