Improving Maternal Health Outcomes with a Focus on Physical Activity

An increasing number of pregnant women in the United States have chronic health conditions — such as hypertension, diabetes, and heart disease — that may put them at higher risk of pregnancy complications. The Department of Health and Human Services (HHS) is working across its agencies to decrease these risks and improve the health of women across the country during pregnancy and the postpartum period. 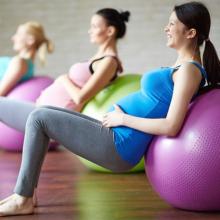 Physical activity is one of many health behaviors that can impact chronic disease and the risk of negative health outcomes. Moderate-intensity physical activity by healthy women during pregnancy has many benefits, including reduced risk of gestational diabetes and excessive weight gain — as well as reduced symptoms of postpartum depression. In addition, physical activity during the postpartum period can benefit a woman’s overall health in many ways, such as improved mood and cardiorespiratory fitness.

Understanding the importance of physical activity to maternal health, Dr. Fink approached ODPHP shortly after the release of the latest edition of the Physical Activity Guidelines for Americans and the Move Your Way campaign. From her experience as a physician, she noted that women are often more open to changes in health behavior during pregnancy and the postpartum period. So she proposed a collaboration to encourage physical activity in these populations. “Despite the many benefits of physical activity during these periods, the majority of women are not meeting the Physical Activity Guidelines,” says Dr. Fink. “Working alone, OWH or ODPHP would be able to create resources and communicate with at-risk groups. But working in collaboration, OWH and ODPHP have the opportunity to reach so many more women and really begin to move the needle.”

OWH and ODPHP are now combining resources and expertise to expand the Move Your Way campaign. The offices are working together to develop new resources specifically for women who are pregnant and postpartum and the health care providers who care for them. Once created, these resources will help get more women moving during this crucial period — supporting the health of mothers and babies.

Earlier this year, ODPHP and OWH worked with colleagues at the National Institutes of Health’s (NIH) National Cancer Institute (NCI) and — with support from a health education and research contractor — finalized plans for conducting formative research with women who are pregnant and postpartum and their health care providers. Research into the attitudes, beliefs, and information needs of these groups will be crucial to the creation of new evidence-informed Move Your Way materials later this year.

The team initially planned to conduct 12 in-person focus groups in 3 locations. As coronavirus began to impact the United States and the need for social distancing grew, the team quickly developed and executed an alternative research protocol that included virtual focus groups. Conducting a series of 24 English and Spanish virtual focus groups allowed OWH and ODPHP to hear from a diverse group of more than 95 pregnant and postpartum women across the country while maintaining social distancing.

The team also conducted remote in-depth interviews with health care providers who specialize in maternal health. These interviews examined health care providers’ beliefs, attitudes, and perceptions around maternal health and physical activity. The team wanted to discover what providers know about the Physical Activity Guidelines for Americans and how they seek information related to physical activity during pregnancy and the postpartum period.

This research has already uncovered common barriers and facilitators to activity, key information sources, and common misconceptions about physical activity for these populations. For example, findings from the interviews with health care providers mirrored Dr. Fink’s experience that women are more open to healthy behavior changes during pregnancy. But preliminary findings from the focus groups suggest that concerns about whether certain types of physical activity are safe may be playing a role in the physical activity behavior of women who are pregnant and postpartum. These insights and others discovered as the team completes its research will be used to create Move Your Way campaign resources that educate health care providers on best practices and encourage women who are pregnant and postpartum to get active.

To stay up to date on the latest announcements from ODPHP and OWH and be the first to hear when new materials are ready, follow @HealthGov and @womenshealth on Twitter or sign up for the ODPHP physical activity listserv.