The YMCA: Engaging Youth Across the Nation 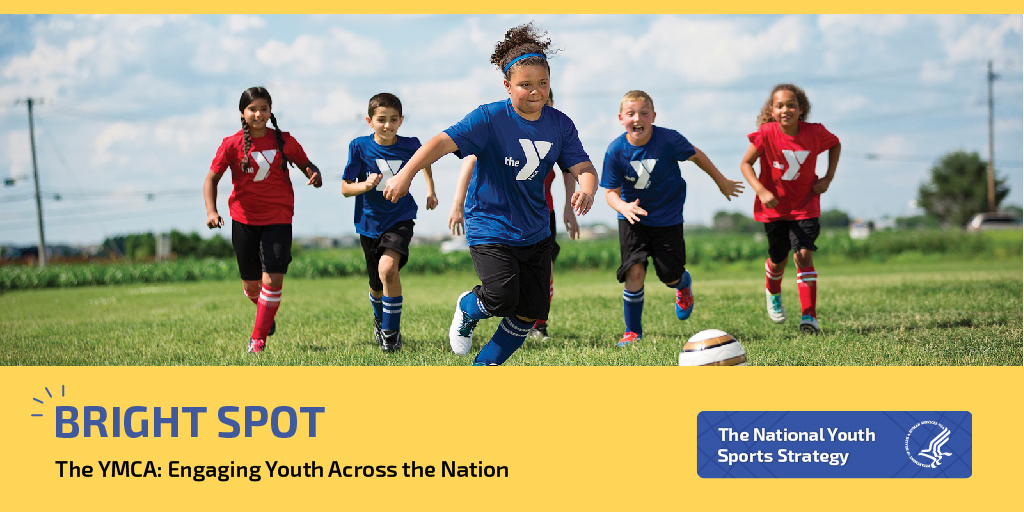 From the National Youth Sports Strategy Bright Spots, a series that highlights how successful programs are boosting youth sports participation across the Nation.

As the largest provider of youth sports programs in the United States, the YMCA uses its national reach to advance positive youth development through sports. It aims to make sports accessible to all by offering a wide variety of sports in after-school programs and camps.

While local programming may vary, all YMCA programs aim to deliver on the key principles of YMCA Youth Sports:

Strategies: Meet All Youth Where They Are
The YMCA already reaches many rural and underserved communities; in fact, about 80 percent of American households live within 10 miles of a Y. But Adamson says they are always looking for creative ways to reach youth in the other 20 percent. “We can’t expect kids without resources to come to us,” Adamson says. “We have to go to them.”

One solution is the “Y without walls.” Matt Thompson, District Vice President, Gateway Region YMCA, explains that Ys partner with local organizations to deliver programs beyond YMCA buildings — anywhere from school gyms to hotel pools. “Even if all you have is some green space,” Thompson says, “we can start youth sports programming.”

Thompson says most Ys avoid pay-to-play and intensive-travel team models that place an undue burden on families. Ys provide financial assistance for youth who need it, and most stick to one practice and one game per week. “We don’t promote specialization,” he says, “and we don’t make families overextend themselves to participate.”

The YMCA also makes sure to include youth with disabilities. More than 25 percent of Ys collaborate with the Special Olympics on adaptive sports offerings, and a pilot program is adapting the YMCA’s Safety Around Water classes to better serve youth with autism and cerebral palsy.

Impact: Sports and Support for Millions of Youth
Nationwide, 2,700 YMCAs work with 600,000 volunteers in 10,000 communities. The YMCA’s size and reach make it the largest provider of youth sports, summer camps, and after-school programs in the United States. Each year the YMCA engages 9 million youth across all programming, including over 1 million youth in youth sports programs.

In addition to engaging youth in sports, YMCA coaches and staff impact youth development by serving as role models. “Having a positive relationship with an adult is a critical factor in the health and well-being of every child,” Adamson says.

Adamson agrees. “That’s where we center all our work: on helping kids increase their confidence, build strong relationships, and create that sense of belonging. It’s about feeling part of something bigger than yourself.”