The mission of University Recreation and Wellness (RecWell) at the University of Maryland is to inspire students to be active and live well. And when RecWell employees learned about Move Your Way — ODPHP’s campaign to promote the second edition of the Physical Activity Guidelines for Americans — they were struck by how well it aligned with their own efforts and messaging.

RecWell reached out to ODPHP to ask about using the campaign on campus. Although the campaign resources are freely available on health.gov for anyone to use, RecWell wanted to adapt the campaign to be more personalized for its audience. With guidance from ODPHP, RecWell began planning its own campaign launch.

“The 4 main benefits Move Your Way emphasizes for adults — boost your mood, sharpen your focus, reduce your stress, and improve your sleep — are so important for the college student population,” says Kate Maloney, Assistant Director for Communications and Marketing at RecWell. “We want to share the message that being active has tangible benefits for students that can help them start feeling better right away.”

Promoting Move Your Way Across Campus

RecWell launched its Move Your Way campaign in March with a kickoff event featuring information tables at various RecWell activities — intramural soccer games, group fitness classes, and opening night for a climbing wall. At the kickoff and other events throughout the semester, RecWell employees handed out Move Your Way fact sheets, stickers, and buttons.

Customizing the Campaign for College Students

ODPHP gave RecWell the flexibility to adapt Move Your Way materials to meet student needs. Specifically, RecWell used its own photos featuring University of Maryland students engaging in a wide variety of activities on campus — like group fitness classes, swimming, throwing a Frisbee, and walking to class. “We wanted to really emphasize the idea that there’s not one way to be active and encourage students to find whatever works for them individually,” Maloney says. ODPHP provided guidance on photo choices to ensure that the adapted materials reflected inclusion and diversity, 2 key messages of the Move Your Way campaign. 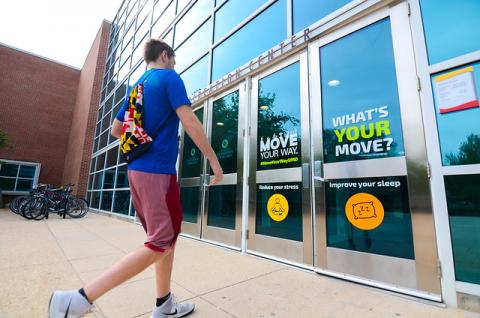 Student employees at RecWell attended training sessions about the Move Your Way campaign so they could be advocates and help promote the message that physical activity doesn’t just include going to the gym or playing sports. Maloney says getting buy-in from student staff was key to the campaign’s success. “In collegiate recreation, student employees are the front line of facilities, programs, and services. They’ve been a huge asset in helping us adapt and share the message.”

From the campaign’s launch on March 25 through the end of the semester on May 13, RecWell estimates that the Move Your Way signage on its facility made 173,090 impressions to 18,520 individuals. Of that total, 16,662 were students, accounting for about 27 percent of the student population at the University of Maryland. In addition:

RecWell also worked with the university’s School of Public Health to develop a survey measuring the campaign’s reach. Of the 129 students who completed the survey, 46.8 percent said they had seen, heard, or read about the Move Your Way campaign. Nearly half reported getting the recommended amount of moderate-intensity aerobic activity every week or almost every week, and more than 40 percent said they get the recommended amount of muscle-strengthening activity every week or almost every week.

Maloney says that feedback has been positive and that students appreciate the inclusiveness of the campaign showcased through the variety of activities and people featured in campaign materials. “Move Your Way has given us another way to emphasize the many benefits of being active and show students how any type of physical activity can help them thrive and live well.”

ODPHP is currently working with the Centers for Disease Control and Prevention (CDC) to add the Move Your Way campaign to the State and Community Health Media Center. This resource will allow users to customize the campaign in ways similar to the approach taken by RecWell. Sign up for ODPHP’s listserv to be the first to learn about updates to the Move Your Way campaign.