As part of this process, ODPHP recruited 2 pilot test communities: Southern Nevada and Jackson, MS. These communities will test out implementation strategies over a 6-month period and provide feedback to help ODPHP create and refine new Move Your Way community resources. On February 9, 2019, Jackson and Southern Nevada held launch events to bring their communities together and generate excitement about the Move Your Way campaign. 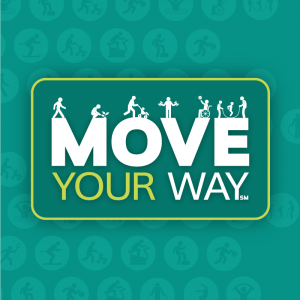 Nicole Bungum and Mindy Meacham, Move Your Way Community Pilot Leads from the Office of Chronic Disease Prevention & Health Promotion at the Southern Nevada Health District (SNHD), worked with the Partners for a Healthy Nevada coalition to coordinate a Move Your Way 5K and Family Fun Walk at Craig Ranch Regional Park. “We used the launch to raise awareness about the wonderful trail system and other outdoor amenities we have here in Southern Nevada,” Bungum says.

Despite unseasonably cold weather, more than 300 people participated in the event. Athletes and representatives from the Las Vegas Aces WNBA team led group warmups from a mainstage and vendors offered fun activities like a Move Your Way selfie station for participants.

A paved course made the event wheelchair and stroller accessible, and Meacham and Bungum were pleased to see a wide range of ages and lots of families participating together. “We heard people saying, ‘Wow, what a great park! I’ve never been here before,’” Bungum says. “So now they’ve found a new place to get active as a family.”

Meacham says that participating in the pilot test with ODPHP helped SNHD reach a larger audience. “We’re a pretty small team and we don’t usually plan such big events. So this was a unique opportunity for us to bring the community together.”

Trying New Moves Together in Jackson

Jackson launched its pilot program with a Move Your Way Try-a-Thon at the Jackson Medical Mall, an indoor space popular with mall walkers. Local radio personalities broadcast live from the event, which featured group physical activities ranging from Zumba and hip-hop aerobics to active games like Duck, Duck, Goose.

Tiffani Grant, Move Your Way Community Pilot Lead from the Office of Preventive Health at the Mississippi State Department of Health (MSDH), says they focused on fun, inclusive activities to encourage a range of demographics to attend. “So you come to check it out, and then you see people doing some line dancing or some circuit training — and maybe you stay and give it a try.” Other activities included blood pressure checks for adults and face painting for kids.

Grant was thrilled to see people trying new activities and encouraging each other to make the effort. “One participant over age 100 was telling others, ‘Come on, get moving!’ At first people might think an activity is too hard, but the point is to move the way that works for you — and to have fun with it.”

The pilot communities are integrating Move Your Way campaign resources into their physical activity initiatives and distributing campaign materials to organizations like schools, health centers, and recreational facilities. “The Move Your Way icon and messages are easy to remember and relate to,” Meacham says. “And because the resources target different age ranges and are available in Spanish and English, we can use them to reach lots of different populations in our community.”

SNHD has seen positive responses to materials that address common barriers to physical activity. “For example, the parent materials don’t just state the guidelines for kids,” Bungum says. “They offers ways for kids to get active when they can’t go outside or participate in organized sports.”

“People have this mindset that activity doesn’t count unless you’re at a fitness center,” Grant says. “But the Move Your Way materials help spread the word that everything counts. If you have limited mobility and you walk outside to your mailbox, that’s movement! It helps people see the significance of every effort.”

Both pilot communities cite strong local partnerships as key to the success of their launch events and were able to leverage existing coalitions to promote the campaign. In Southern Nevada, the launch process led to a higher level of collaboration with existing partners. “We were lucky to have an existing coalition to lean on for planning and promotion,” Bungum says. “And we found that the process of working together on such a large event really strengthened those relationships.”

In Jackson, MSDH seized the opportunity to expand their local coalition. “We’re working with new partners we would not have found without the pilot process,” Grant says. “And those partnerships are ongoing — we continue to meet regularly and generate new ideas for physical activity promotion in our communities.”