This Bright Spot describes how Vinny DeMarco and David Jernigan collaborated with partners to pass an alcohol sales tax in Maryland.

Challenge: Alcohol use is common and can be dangerous

Alcohol use is very common in the United States. Nearly 70% of Americans age 18 and older report drinking alcohol in the past year1—and for some, this leads to negative health outcomes. About 90,000 people die from alcohol-related causes each year,2 making reducing alcohol use a national public health priority. Alcohol also contributes to other health problems like heart disease and certain cancers.3

In Maryland, alcohol was responsible for about 1,300 deaths per year from 2006 to 2010,4 and it played a role in many violent crimes. Measures like educating the public and providing substance abuse treatment weren’t reducing these numbers, so experts decided to focus on a policy approach: increase alcohol sales taxes. 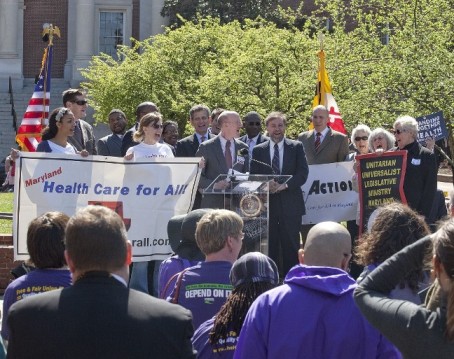 In 2007, the Community Preventive Services Task Force found that increasing alcohol taxes was an effective approach to reducing excessive alcohol consumption and related harms.5 But in spite of the evidence base for this strategy, it has often proved difficult to get these taxes in place. For example, in 2010 advocates in at least 23 states attempted to pass alcohol sales taxes—all without success.6

But in 2011, Vinny DeMarco of the Maryland Health Care for All! Coalition and Dr. David Jernigan of the Johns Hopkins Bloomberg School of Public Health were able to change that in Maryland. They worked with partners to successfully advocate for increasing Maryland’s sales tax on alcoholic beverages.

Even with this strategic approach, the coalition faced challenges from an influential opponent. “The alcohol lobby is powerful,” DeMarco says, “But once we opened the campaign to the general public, we were able to overcome them.” He stresses that almost any challenge can be tackled with strong evidence, a strong coalition, and public engagement.

The 2011 tax on the price of an alcoholic drink was the state’s first increase in beer and wine taxes in almost 4 decades, and first increase in liquor taxes in more than 5 decades.8 After the sales tax took effect, statewide alcohol sales decreased by 3.8% compared to what trends predicted.9 And the state raised about $70 million in additional tax revenue in a single year, which helped fund education programs and services for people with disabilities.

“Passing the alcohol sales tax was a win-win,” DeMarco says. “We did something politically popular that also brought money into the state.” And after the tax was implemented, Maryland rates of motor vehicle crashes involving a driver who’d been drinking gradually decreased by 6% across all ages—and 12% in drivers ages 15 to 34.10

DeMarco and Jernigan believe that the Six Steps can help build a strong foundation when working on any new public health policy. In fact, DeMarco has used the Six Steps to pass a tax on tobacco in Maryland, as well.11

The pair also thinks that increasing alcohol sales taxes could help reduce alcohol-related harms nationwide. They note that it’s important to calculate the cost of alcohol-related problems. “The narrative is often about how alcohol can revitalize cities by boosting the local economy,” Jernigan says. “But we don’t always consider the cost.” Alcohol-related harms cost the United States $2.05 per standard drink12—yet the median state and federal alcohol taxes are just $.21 per drink.13

When they reflect on their collaborative success in Maryland, DeMarco and Jernigan say they really complemented each other—DeMarco as the “strategist and organizer” and Jernigan as the “expert.” Their mutual respect is clear, and the relationship is an important reminder that public health wins often depend on a strong team that works together toward a common goal.