Weigh in on a proposed new objective for Healthy People 2030! Send us your comments by December 2, 2022. 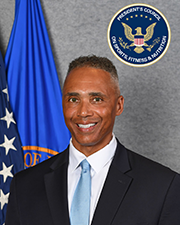 Robert Wilkins was appointed to serve as a member of the President’s Council on Sports, Fitness & Nutrition. Since he was 12 years old, Rob has been an advocate for health and fitness when he saw a copy of Muscle Builder magazine in a local supermarket. A native of Linden, New Jersey, Master Sgt. Rob Wilkins, USAF, Ret., now serves as the Military Evangelist for the Sightline Media Group, the world’s largest publisher of military-related magazines.

Some of his key military assignments include serving on the staff of The Joint Improvised Explosive Device Defeat Organization (JIEDDO) and Legislative Liaison Office, Secretary of the Air Force, where he was responsible for organizing, coordinating, and escorting Congressional delegations worldwide.

Rob retired from active duty in January 2009, and is honored to continue serving military personnel and their families, by serving on the board of Boulder Crest Retreat for Military and Veteran Wellness and supporting Veteran Service Organizations, military related fitness organizations, and various charity efforts.

Rob currently serves as the President of Rolling Thunder, Washington, D.C., Inc. The Rolling Thunder Motorcycle Rally, held Memorial Day weekend in our nation’s capital, is the world’s largest one-day event with over one million participants.

Rob currently lives with his wife, Amy, and his son, Robert, in Northern Virginia.