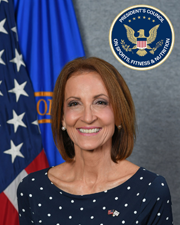 The Honorable Nan Hayworth, M.D. was appointed to serve as a member of the President’s Council on Sports, Fitness & Nutrition. Dr. Hayworth is the only female physician ever elected to a full term as a Member of the House of Representatives, serving the 19th District of New York in the 112th Congress. She is currently the manager of the Patriot Legal Expense Fund Trust, established to assist members of President Trump’s team with legal expenses sustained as a result of their cooperation with Special Counsel and related investigations.

As a freshman in the House Majority, Nan was a member of the House Financial Services Committee and the Majority Whip Team; she was chosen by Speaker Boehner to serve on two House-Senate Conference Committees; and she worked with House Republican Conference Chair Jeb Hensarling on special communications initiatives with both fellow House members and Senators.

A frequent guest on radio and television appearing on behalf of the Independent Women’s Forum, Republican National Committee, and the Trump Campaign Advisory Board, Nan has been featured on CNN, Fox Business Network, Fox News Network, MSNBC, and Newsmax.

A board-certified ophthalmologist, Nan practiced for nearly 20 years in Mount Kisco, New York, first building her own practice before joining the Mount Kisco Medical Group (now CareMount Medical). Nan then became a vice president and medical director at Cline Davis & Mann, a division of Omnicom. Currently she serves as a Strategic Business Development Advisor for Pilot Growth Equity and as a member of the board of directors of HealthEC (Piscataway, NJ).

Nan is the chairman of the board of directors of ConservAmerica, a Republican organization dedicated to environmental protection; she is a member of the boards of both the Independent Women’s Forum and the Goodman Institute for Public Policy Research.