Using the Food Pattern Modeling process, can healthy eating patterns for vegetarians and for those who want to follow a Mediterranean-style diet be developed? How do these patterns differ from the USDA Food Patterns previously updated for the 2015 DGAs?

Over time, the USDA Food Patterns have represented the types and amounts of foods that will provide sufficient nutrients to meet IOM nutrient recommendations and Dietary Guidelines for Americans recommendations, within calorie needs, for all age/sex groups 2 years of age and older. They are updated every five years during the deliberations of the Dietary Guidelines Advisory Committee, and are presented to the Committee for their assessment of how well the Patterns meet their goals. As part of the update, amounts recommended from each food group may be modified to reach all or most of the specified goals. See the food pattern modeling report Adequacy of the USDA Food Patterns (Appendix E3.1 of the 2015 Dietary Guidelines Advisory Committee Report) for detailed information on the development and evaluation of the overall USDA Food Patterns.

In 2010, vegetarian adaptations of the Patterns were developed at the request of the DGAC and included in the 2010 DGA policy document.  These did not modify the underlying structure of the patterns, but rather substituted plant-based foods for animal-based foods at the same overall intake level for each food group.

For 2015 an emphasis of the DGAC has been on identifying evidence-based dietary patterns.  The 2010 DGA stated that there is more than one way in which to consume a healthful diet, and the evidence to support this message has expanded with time.  In keeping with this growing emphasis in the DGA, the recommended food patterns should illustrate more than one approach to consuming a healthful diet. The dietary patterns reviewed by the 2015 DGAC, including those identified in the NEL Dietary Patterns Systematic Review Project, has indicated evidence for health benefits of following a Mediterranean-style diet (Med-style) and for following a vegetarian diet, in addition to following a Healthy US-style pattern typified by the DASH diet and the USDA Food Patterns (Nutrition Evidence Library, 2014). The 2015 DGAC has explored quantitative information about the food group content of the Med-style and vegetarian patterns, making it feasible, for the first time, to use that information as the basis of food patterns that reflect Vegetarian and Med-style diets.

The types of information about food group intakes by vegetarians and those following a Med-style diet differ, so the approaches to creating these patterns will be presented separately.

Development of the Healthy Vegetarian Patterns 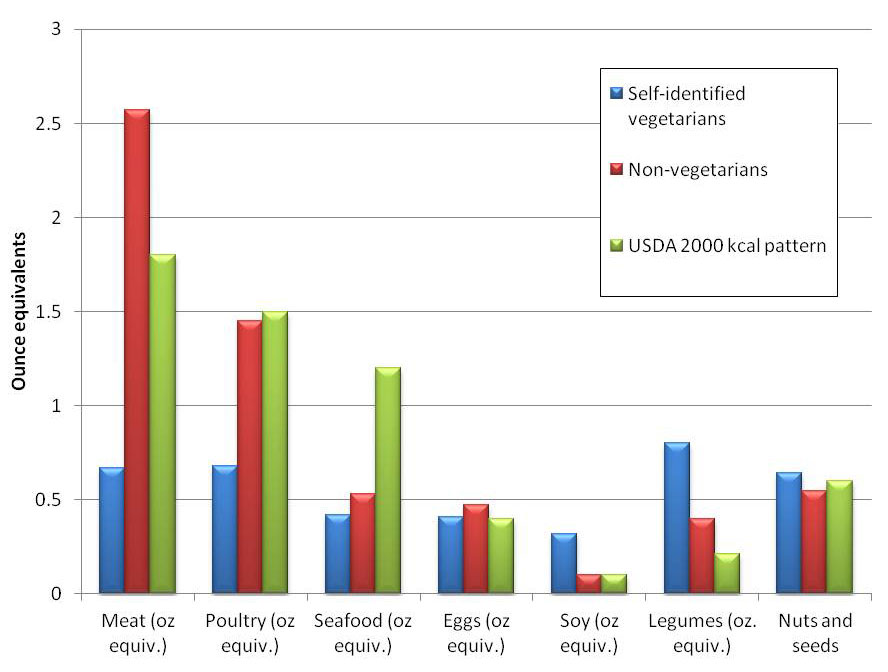 In the soy foods subgroup, most consumption by non-vegetarians is from processed soy products, such as soy protein isolate, incorporated into a wide variety of manufactured foods. For the Vegetarian Patterns, increased consumption of tofu was used to increase the total amount of soy products in the Patterns, rather than increasing the processed soy component.

Development of the Med-Style Patterns

Quantitative data on food group consumption from studies using a Mediterranean dietary index score was available for 7 cohorts and 2 interventions, almost all in Europe. For use in the Dietary Patterns Composition analysis, consumption data was selected for the groups with a high Med-diet index score and positive health outcomes. These data were converted into grams of food group intake per 1000 calories, to standardize them. For most food groups, the range of intakes was wide. Table 2 presents the range of intakes and the median intake for each food group from the studies that assessed dietary patterns using a Med-diet index. It also shows the amounts in USDA Food Patterns for adults, also converted to grams per 1000 calories, for comparison.

Amounts of fruit, seafood and red/processed meats are notably higher in the diets with high Med diet scores than in the USDA Patterns. Amounts of dairy are notably lower. While grains are somewhat lower, there is little consistency in what may have been included in this category among the studied diets. Therefore, this food group was not considered for change. Also, the red and processed meat category intakes are notably higher than in the current USDA Patterns, but these were not considered for change. The saturated fat and sodium (in processed meats) in the US make this category inappropriate to increase. However, because of the increase in seafood, the overall amount of Protein Foods was increased in the Med-Style Patterns. In contrast, the total amount of Protein Foods in the Vegetarian Patterns was substantially less than in the other Patterns.

Table 3. Composition of the Healthy Vegetarian and Healthy Med-style Patterns, and Healthy US Patterns, at the 2000 calorie level. Food group amounts per day, unless noted per week.

Table 4. Selected nutrients in theHealthy Vegetarian, Healthy Med-Style, and Healthy US-Style Patterns, at the 2000 calorie level as a percent of the RDA for a female 19-50 years of age.

Note that the Med-Style Pattern at 2000 calories does meet the calcium RDA for a woman 19 to 50, but it would not meet the higher RDA for an adolescent 9 to 18 or an adult over the age of 50, whose RDA is higher. For adolescents, the amount of calcium in the Med-Style Patterns, depending on the specific calorie level required, ranges from 71% to 82% of their RDA, and for adults over the age of 50, calcium levels range from 77% to 83% of their RDA. (See additional Tables E3.7.B2 and E3.7.C2 for all results.) The USDA Food Patterns have traditionally used meeting RDA and other nutrition goals as their standard; the Med-Style Patterns do not fully meet the RDAs. However, these diets have been shown to have health benefits, and the entire dietary pattern may modify requirements for specific nutrients.

The 2015 DGAC placed an emphasis on identifying and describing evidence-based healthful dietary patterns, and identified evidence for health benefits of following a Med-style diet and a vegetarian diet, in addition to following a Healthy US-style pattern typified by the DASH diet and the 2010 USDA Food Patterns. The 2015 DGAC also explored quantitative information about the food group content of the Med-style and vegetarian patterns, making it feasible, for the first time, to use that information as the basis of USDA Food Patterns that reflect Vegetarian and Med-style diets.

All of the Patterns meet nutritional goals for almost all nutrients with some notable exceptions. With a few exceptions, the nutrient goals not met are the same as for the original USDA Food Patterns. Levels of calcium are highest in the Vegetarian Patterns, because in addition to Dairy they contain larger amounts of tofu, which is often precipitated with a calcium salt, although amounts of calcium vary widely across tofu types. Levels of calcium are lowest in the Healthy Med-Style Patterns, because the amounts of Dairy in those patterns have been decreased.

Nutrition Evidence Library. A series of systematic reviews on the relationship between dietary patterns and health outcomes. Alexandria, VA: U.S. Department of Agriculture, Center for Nutrition Policy and Promotion, March 2014.  Available at [URL]

E3.7.C1 Comparison of nutrient content of each USDA Healthy Vegetarian Pattern to the nutritional goals for that pattern

E3.7.C2 Comparison of nutrient content of each USDA Healthy Mediterranean-Style Pattern to the nutritional goals for that pattern